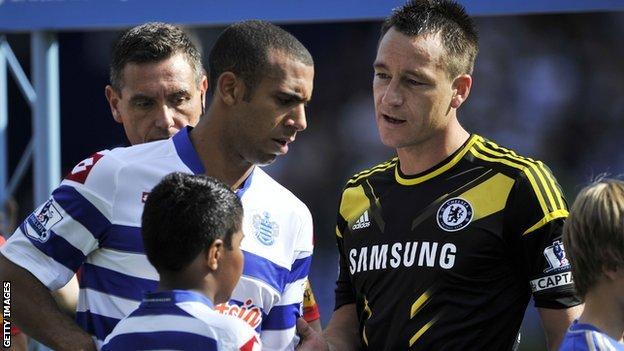 An Independent Regulatory Commission has released the written reasons for the Football Association handing a four-game ban and a £220,000 fine to Chelsea's John Terry for racially abusing QPR's Anton Ferdinand.

In the 63-page document, it says that John Terry is not a racist, but that it found the words he used to Ferdinand were insulting.

Terry, cleared in court of abusing Ferdinand, has 14 days to appeal.

Here are the main points of the commission's findings.

WARNING: The below contains extreme language and swearing.

The commission found there was no dispute that racially sensitive words were used by John Terry but added that had they been used by way of forceful rejection/inquiry then they would be "not enough for him to be found guilty of misconduct in this particular case".

The evolution of Cole's evidence

With regard to the criminal case, the Commission underlined that Chief Magistrate Howard Riddle had noted it was:

The report said: "The Chief Magistrate did not use any language to convey the sense of something that was probable, or more likely than not, in connection with either of those pivotal propositions."

In evidence provided to the FA, Anton Ferdinand made "no reference to colour, race or ethnicity" which was consistent with other statements made regarding what happened on the pitch. He maintained there were no words beginning with "b" that might have been misunderstood by Mr Terry as being "black".

Terry's decision not to give evidence denied the Commission the opportunity to test his theory, given that his credibility "had its limitations" in terms of the extent to whether an acquittal would have been possible given a different burden of proof.

"The written judgement makes for 63 pages of highly unpleasant reading, not just for John Terry, but also for Ashley Cole and Chelsea club secretary David Barnard over the reliability of their evidence."

That Mr Ferdinand did not accuse Mr Terry of racially abusing him and did not use the word "black" or any words in reference to race. The report said: "We are driven to conclude not just that it is 'highly unlikely' that Mr Ferdinand accused Mr Terry on the pitch of using these words, but that he did not."

That Mr Terry did not hear, and could not have believed, understood or misunderstood Mr Ferdinand to have used the word "black", or any word(s) that might have suggested that he was accusing Mr Terry of racially abusing him.

That Mr Cole did not hear, and could not have believed, understood or misunderstood Mr Ferdinand to have used the word "black" or any other word beginning with the word "B‟ that had any reference to, or context with, skin colour, race or ethnicity.

That in the brief time that it took Mr Ferdinand to advance up the pitch towards Mr Terry, it is improbable that the focus of Mr Ferdinand's abuse and insults of Mr Terry would have changed so quickly from an allegation of an affair, to one involving skin colour, or race.

Apart from the initial phase of the incident as a whole, Mr Terry and Mr Ferdinand were never closer to one another than an estimated distance of 19 metres. Given the noise of the compact Loftus Road stadium that "it is unlikely that Terry would have heard anything that Ferdinand may have been saying".

Aspects that reinforced the decision

The report said there were further aspects of Terry's defence that the Commission found "improbable, implausible and contrived":

"In the light of those findings, the Commission is quite satisfied, on the balance of probabilities, that there is no credible basis for Mr Terry's defence that his use of the words "[swear word] black [profanity]" were directed at Ferdinand by way of forceful rejection and/or inquiry. Instead, we are quite satisfied, and find on the balance of probabilities, that the offending words were said by way of insult."

Barcelona case: Comments made by Terry after he was sent off against Barcelona in the second leg of the Champions League semi-final for kneeing Alexis Sanchez where he was reported to have said it was not "deliberate" were considered. Insufficient evidence meant they could not place any weight on this, but the incident did "undermine" character witnesses who suggest Terry has "preternatural reserves of self-control".

Mr Terry's press statement: In a newspaper article, Terry submitted an explanation of the exchange where he claimed his reply to Ferdinand was different to that already placed on record. Without Terry explaining the significance of the discrepancy, the commission said the "unchallenged inconsistency" can provide further support for their decision.

The evolution of Ashley Cole's evidence: The word "black" was introduced into Ashley Cole's statement retrospectively with a view to bolstering Terry's defence, the report says. But it said that the nature of recollections from Chelsea club secretary David Barnard cast doubt on the claim that Cole heard Ferdinand use the word "black" when insulting Terry. Cole's initial statement referred to an unidentified "b-word" but did not use the word "black". Barnard then made subsequent claims, regarding swear words, which were not consistent with initial statements.