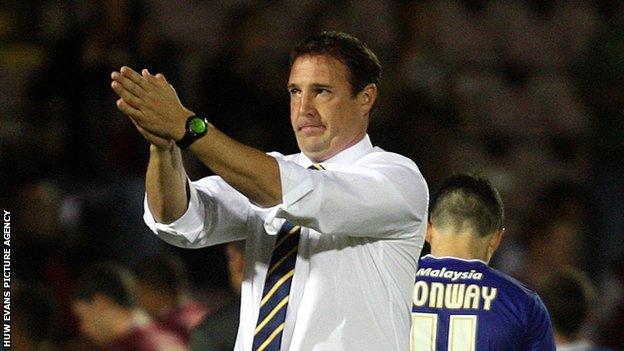 Cardiff City boss Malky Mackay says there is no added pressure on his side now they are top of the Championship.

But he says if the Bluebirds stay at the summit they will become a target for their rivals.

Cardiff, who will be without Craig Bellamy [knee], travel to Ipswich Town on Saturday having won five of their last six games.

"[There is no pressure] at the moment. But the longer you stay there… you are the scalp everybody wants," he said.

"The way things are there are a lot of teams quite close to each other and that lead could change hands on a regular basis."

Cardiff went top of the table with a 2-1 win over Birmingham City on Tuesday night, stretching their winning run at home to five matches.

But despite leading the Championship by a point over second-placed Leicester City, Mackay is refusing to take for granted their trip to second-from-bottom Ipswich.

"I see it as a tough, tough game. They have brought in a couple of loan players in the last day or so," he warned.

"I've never had an easy game at Ipswich since I've been in England.

"Any away game in this country is difficult.

"So we go there making sure we have got to give everything we can otherwise it's going to be a tough game.

However, Mackay is happy with his squad's progress.

"To go and play against two tough teams [Blackpool and Birmingham City] and come away with six points in a real tough week [is impressive]."

As well as Bellamy, Cardiff look set to be without Tommy Smith and Jordon Mutch for the trip to Portman Road.

"Craig won't be coming to Ipswich with us. He took a knock on his knee and had to come off the other night.

"Rudy Gestede will come with us. So that's one bright light as far as that is concerned.

"Tommy and Jordon are very close. So, if not for this one they will be definite for two weeks' time."