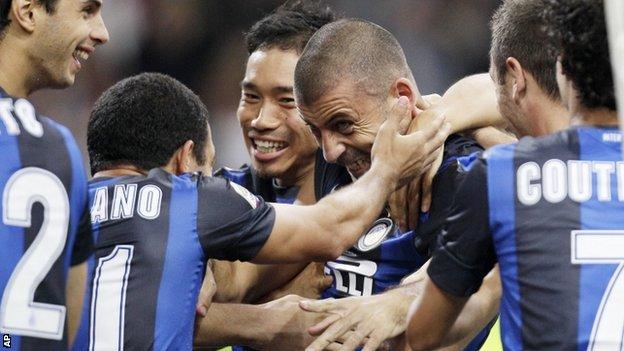 AC Milan lost 1-0 at home to 10-man Inter in the 161st Milan derby to increase the pressure on manager Massimiliano Allegri.

The result leaves the Rossoneri in 11th place in the Italian top flight, having won only two league matches from seven.

Walter Samuel scored the only goal of the match when he met a free-kick at the far post with a brilliant header.

Inter were down to 10 men early in the second half when Yuto Nagamoto was shown a second yellow for handball.

But despite the man advantage and creating several chances, Milan could not make the breakthrough.

Allegri is a man feeling the heat according to Italian newspapers. His side went into the derby 11th in the table, nine points behind leaders Juventus and five points behind their city rivals.

What the 45-year-old needed was for his side to make a good start in what was the biggest match of their season so far, but what happened was exactly the opposite.

Allegri was already out of the dugout when former Milan player Antonio Cassano, who was jeered throughout the match by home fans, was deemed to have been fouled by Daniele Bonera on the left side of the Milan half.

The Rossoneri manager carried out a heated conversation with referee Paolo Valeri over the decision before standing back and watching Samuel twist the knife for Inter with a brilliant header at the far post from the resulting free-kick.

Allegri's side should have been punished again moments later when goalkeeper Christian Abbiati's awful pass from his area found Diego Milito. Fortunately for the Milan number one, he blocked the Argentine striker's first effort and then saved the headed follow-up.

It was a poor start for Milan, but they created more than enough chances to not only draw but even claim what would have been their 61st win in 161 derbies. They were also handed an advantage when Japan's Nagatomo was shown a second yellow for his deliberate handball.

Riccardo Montolivo, who was one of Italy's stars at Euro 2012, led the charge with shots from distance that troubled Samir Handanovic.

He was twice forced to parry the midfielder's strikes and from the second the rebound fell to Bojan, who slipped as he tried to slide his shot past the keeper.

Montolivo also thought he had scored with a brilliant volley, only for the referee to award a free-kick to Inter for a foul on their keeper.

Ghana midfielder Kevin-Prince Boateng volleyed wide from 10 yards and substitute Giampaolo Pazzini failed to convert a Robinho cross by a couple of inches, while Dutch winger Urby Emanuelson narrowly missed the target with his low strike.

In the final five minutes Robinho tried to claim a penalty after he said he was pulled down by Samuel, but referee Valeri waved away Milan's appeals.

The defeat is already Milan's fourth in the league - last season their fourth league defeat did not come until February.