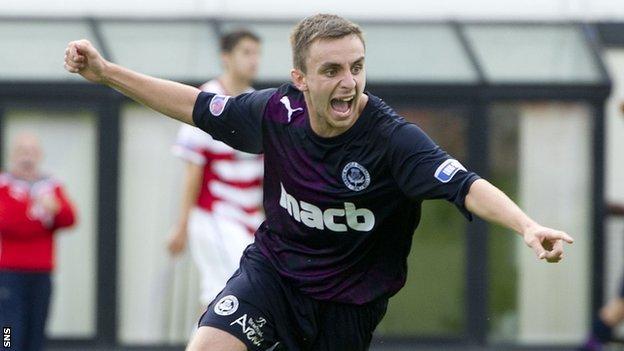 Jackie McNamara's young guns are hoping to prove their doubters wrong as they look to propel Partick Thistle back into Scotland's top flight.

The Jags have made an impressive start to the season, winning six of their seven First Division games, and remain unbeaten.

One player who is loving his new life in Maryhill is winger Steven Lawless. The speedy 21-year-old swapped Fir Park for Firhill in the summer, signing a two-year deal, following his release from Motherwell.

"I would love to get back into the SPL with Partick Thistle," he said.

"You want to play at the highest level possible and, of course, I was disappointed that I never got a chance in the first team at Motherwell.

"It would be nice to be back in the SPL to show people that I am capable of playing at that level.

"It was really hard to break into the first team at Motherwell last season because they were playing so well."

Lawless has not let his release knock his confidence and he has netted six goals in seven league games for the Maryhill side.

In fairness, he never had time to feel sorry for himself with Thistle manager Jackie McNamara expressing an interest in signing him straight away.

The winger said: "I was at a golf day with the Motherwell team, two days after I had been released, when I heard that Partick Thistle were interested.

"The gaffer had contacted Gordon Marshall, the goalkeeping coach at Fir Park, and made him aware that they wanted to talk to me.

"I had a few other offers but I wanted to come to Thistle.

"This is the first time that I have ever gone into a new dressing room, as I came through the youth system at Motherwell, but there are no cliques and everyone has a great attitude.

"We will see the real strength of our squad if we have a few poor results. I just hope that we can push on from our great start and gain promotion."

Jags defender Stephen O'Donnell praised his new team-mate, who has become a bit of a fans' favourite since his arrival.

"I played against Steven at youth level a few times and I always thought he was a handful," the 20-year-old full back said.

"But I don't think anyone thought he would hit the ground running as quickly as he has. He has been terrific."

O'Donnell has also faced the disappointment of being released by an SPL side - Celtic let him go in 2011.

"I would love to play in the SPL against Celtic and help beat them, as I'm sure Steven would love to score against Motherwell if he happens to play against them," he continued.

"It's hard to be released by a club but it does drive you on to show people that you are good enough to play at a high level."

O'Donnell, now in his second season with Thistle, is an ever-present in McNamara's side, and feels that the experience and disappointment of last season has helped him to improve.

"As a player you are learning all of the time, and there were games last season where we felt that we could have done a lot better. But any mistakes I've made I've learned from and they have made me stronger as a player.

"I feel we have a squad here with a healthy mix of youth and experience that can help us gain promotion.

"We have made an excellent start, but we have to keep it going without getting carried away."

Thistle will now hope to tighten their grip on first place in the First Division when they travel to in-form Morton this weekend.