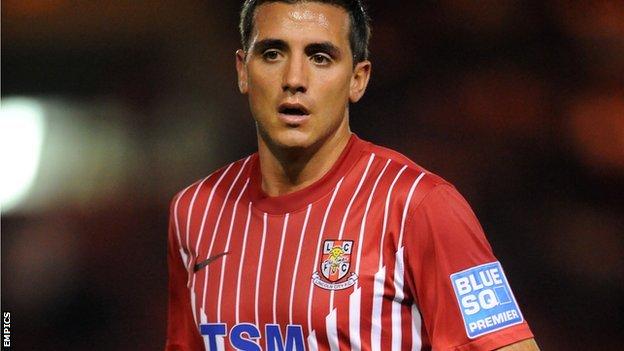 Lincoln City secured their first away win of the season to stun high-flying Wrexham in the Blue Square Bet Premier.

Lincoln made it 2-0 with Taylor's 25-yard shot before Connor Robinson added a third with another long-range effort.

Colin Larkin fired a low fourth for Lincoln in between two goals from inside the penalty area - from Jay Colbeck and Joe Clarke - for Wrexham.

It was Wrexham's first defeat in 13 matches and their first loss at the Racecourse since April but Andy Morrell's side remain second.

"We weren't great. [I'm] massively disappointed. It was a bad day at the office all round. You've got to give them credit because they came and pressurised us.

"You've seen some crazy results throughout the Conference and I've said the most consistent will win and we weren't that today.

"But we go again - all the lads are together and we just need to get back to what we're good at and that's getting at teams and in their faces. We weren't able to do that today."

"The standards that we set today were excellent.

"We've played very well here and the boys should take huge encouragement from it.

"We'll continue to work hard and enjoy the victory."