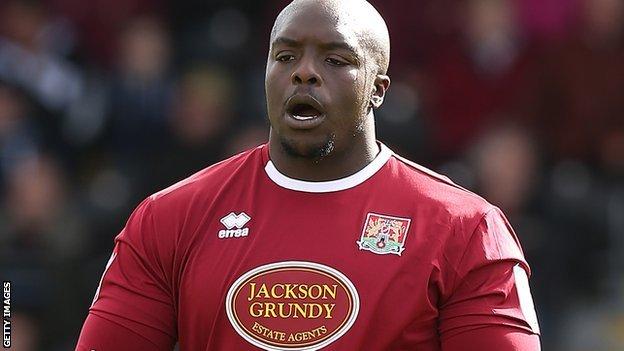 Aidy Boothroyd's Northampton moved into the top half of League Two with a convincing home victory against Exeter.

Adebayo Akinfenwa volleyed in and Kelvin Langmead converted a cross from Manchester City loanee Emyr Huws to give the Cobblers a 2-0 lead.

Arron Davies and Jamie Cureton missed chances to bring Exeter back into the match either side of the break.

And a Northampton win was assured once Alex Nicholls headed in Chris Hackett's free-kick with six minutes remaining.

"What he (Emyr Huws) does is he puts his foot on the ball and he keeps it and you can give him it in tight areas and he'll not lose it and his distribution is excellent.

"He's got the feet to go past people and provide crosses so I'm really pleased with his debut.

"I've watched him a number of times and he's going to be a top, top player.

"It was a good home win. I think we beat them comfortably."

"Watching the game I still think we could have got a result, but essentially its down to goals and goals conceded and we certainly came on the wrong side of that.

"We can't rely on having to score two or three to get a result. I have no grudge to bear at all with the way we passed it and attacked, we played our game.