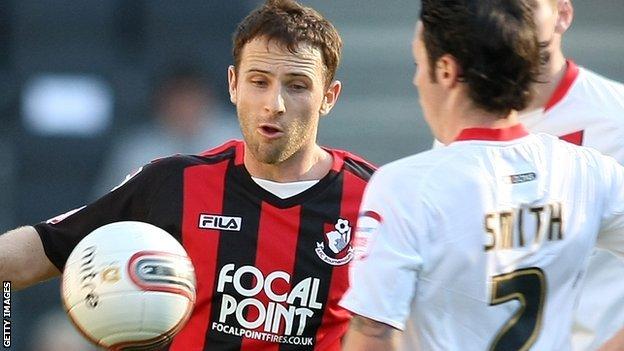 The Cherries wasted the best chance of a poor first half when Eunan O'Kane shot tamely at O's keeper Ryan Allsop.

They finally went ahead when Simon Francis's corner was deflected in with Lewis Grabban getting the final touch.

Just over a minute later, Marc Pugh rounded Allsop to double the lead and ensure a happy homecoming for Howe.

Orient had to defend a barrage of corners from the hosts, who won the corner count 17-1, but rarely threatened themselves and were unable to capitalise on a first-half error by Cherries keeper David James.

Howe and his assistant Jason Tindall, who had left the south coast club for Burnley in January 2011, received a rapturous reception from the Bournemouth fans before watching the game from the stands.

"What's pleased me most is that the players can finally leave this stadium after a game with their heads held high.

"Everybody who takes a team wants to win and I'm no different.

"I was disappointed with the loss last week, delighted we've won this week.

"We have played reasonably attractive football, I like the tempo of my teams to be quick, I like to send the crowd away thinking they've been entertained."

"It wasn't a classic game.

"Both teams were giving the ball away for the entire match.

"In the end it was settled by two gifts. I think we gifted them the two goals.

"We will start nice and early and go and put things right on the training ground."