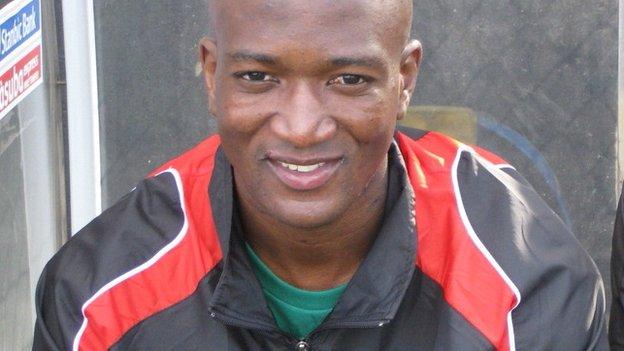 Two goals from Zimbabwe striker Edward Sadomba earned Al Hilal a place in the semi-finals of the Confederation Cup on Friday.

His brace sealed a 2-0 win for Hilal over Al Ahly Shandy in an all-Sudan clash in Omdurman.

Sadomba struck just 48 hours after being cleared of match-fixing allegations in Zimbabwe.

It was the perfect way for the forward to celebrate news that he is free to play for the Warriors again.

Sadomba was among a group of Zimbabwe stars barred from playing for the national team while an independent committee probes claims that the country deliberately lost matches on tours to Asia between 2007 and 2009.

The 29-year-old scored late in the first half and midway through the second as Hilal clinched a place in the last four.

Hilal are now tied at the top of the table on 11 points with their bitter domestic rivals Al Merreikh, who drew 0-0 with Angolan outfit InterClube on Saturday.

The mid-October derby between the two Sudan giants will decide the Group A winners.

Sadomba has netted five times in the Confederation Cup this season, making him joint leading scorer with Ismaila Diarra from Malian club CO Bamako, who were eliminated during the qualifiers.

His performances in Africa and Sudan earned him a place this week among 32 candidates for the 2012 Caf Africa-based Footballer of the Year.

In Group B Djoliba, who have already qualified for the semi-finals, remained unbeaten as they beat Stade Malien 2-1 in a Mali Derby on Sunday.

The result means that Stade cannot now reach the last four of the tournmanent.

AC Leopards from Congo-Brazzaville failed to reach the last four on Saturday as they lost 3-1 in Morocco to Wydad Casablanca.

The Congolese side remain second in the group with 6 points with Wydad third a point behind.

The runners-up from the group will be decided with the final group games on the weekend of 19-21 October when Leopards host Djoliba and Wydad travel to face Stade Malien.