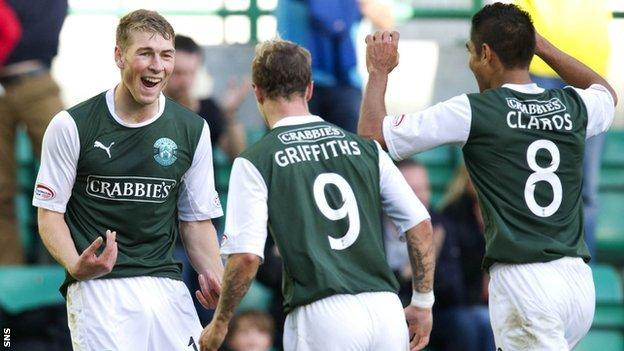 Manager Pat Fenlon is refusing to get carried away by Hibernian's place at the Scottish Premier League summit.

Hibs' 3-0 win over Dundee was their third home league win of the season, one more than last season's tally.

Fenlon told BBC Scotland: "It's hard to believe, I suppose. From where we were last season to where we are now, we've turned it around, but it's a bit early in the season.

"I'm pleased for everybody at the club. There's commitment from the players."

The result means the length of the table separates Hibs and Dundee, who have lost seven out of nine matches since their promotion from the First Division.

Hibernian took the lead from an Eoin Doyle header and moved two goals in front when Leigh Griffiths converted an early second half penalty.

And the points were secured when David Wotherspoon worked a one-two with Tim Clancy and curled a shot beyond Rab Douglas with 16 minutes remaining.

Fenlon added: "I was pleased today. It wasn't brilliant at times but it was a professional performance. I thought we did enough to win the game.

"We worked hard and we didn't concede a goal.

"Doyle, probably over the last three weeks, has really come on and you can see the confidence coming through him.

"He might have had three or four today. I thought he was excellent, his work-rate was very good.

"In most of the games we have played we have looked like scoring goals.

"We have that in our team. If we can stop conceding them we will be a difficult team to beat."

The Hibs manager has been able to field a more settled team this season compared to last. Against Dundee, he made only one change to his starting line-up.

"The plus from our point of view is that we've been able to bring Ryan [McGivern] in and Tom [Taiwo] in off the bench.

"We've got some real quality, we have a little bit of strength in depth, so we're delighted with that."

Fenlon says he has not discussed with the players Hibs' 5-1 defeat by Edinburgh rivals Hearts in last season's Scottish Cup final - "there's no point, it's a totally different team" - but Hibs' current good form is good news for the supporters.

"I'm delighted for them because they have been taking a bit of flak after the cup final last year," he said.

"They deserve to go away and hold their heads up in the city.

"They were great again today but it's a long road and we are only at the start of it."