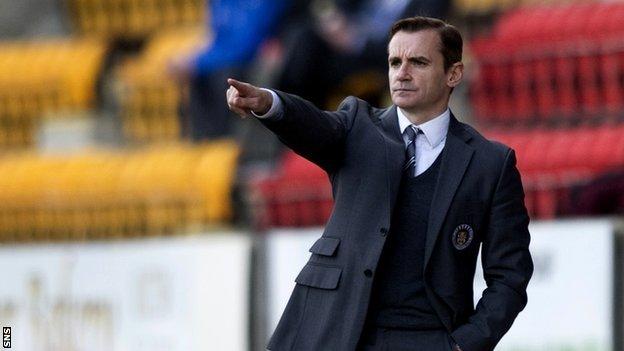 St. Mirren manager Danny Lennon was particularly disappointed to lose away to St Johnstone on the anniversary of his club's first ever match.

A victory over the Saints would have been a near perfect mirror image, that opening 1-0 win having come over a side called Johnstone Britannia.

"This is the 135th Anniversary of a great football club," said Lennon after the 2-1 defeat.

"But there will be more great glory days to come and we will continue on our pathway of progression."

St Mirren had been looking to record their third straight victory but instead were St Johnstone's fifth consecutive victims.

"With the international break coming, it gives us a chance to reflect and regroup ahead of a very difficult game against Celtic," said Lennon.

"St Johnstone are on a great run and this time showed their quality."

Lennon acknowledged the part played by opening goalscorer Nigel Hasselbaink, who was a Buddies player until turning down a new contract in the summer.

"Nigel and Gregory Tade will give many defences a difficult time," he said.

"The way we started the game in the first 25 minutes was exceptional.

"But we looked shellshocked to go behind.

"We made one or two changes at half time and getting our goal back gave us great hope.

"I have to give the lads great credit as they had the fans on the edge of their seats up until the final whistle in search of an equaliser."

Lennon acknowledged that his side had a couple of penalty claims rejected in the closing stages but did not wish to make much of them.