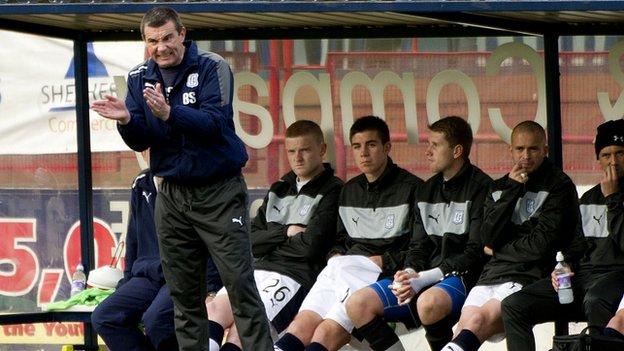 Dundee manager Barry Smith called on his players to cut out the mistakes which have blighted his team's return to the top flight.

The Dens Park club lost 3-0 to Hibernian on Saturday and are bottom of the Scottish Premier League with just four points from nine matches.

"Mistakes are killing us, that's the be-all-and-end-all," the Dees boss told BBC Scotland.

"Individual errors are killing us, we have to be better all over the park."

Dundee fell behind to an Eoin Doyle strike after half an hour as Hibs tried to move to the summit of the SPL.

Smith felt that, although Hibs are in good form, Dundee were responsible for their own downfall.

Smith, who played more than 400 times for the Tayside club, knows that hard work is the only remedy to their current predicament.

"The boys know they'll have to work hard in training, and we have to sort these things out now to give ourselves a chance for the season."

There was praise, however, for one member of Smith's side - goalkeeper Rab Douglas, who at 40 is enjoying an Indian summer.

"Robert's done extremely well this season, but he shouldn't have to make these saves because we're not getting close enough to people," the Dens Park manager pointed out.