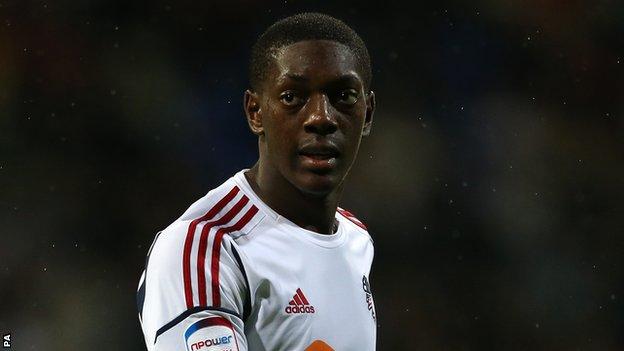 The Football Association is investigating claims by Marvin Sordell that Bolton players were racially abused during their loss to Millwall.

Sordell, 21, said on Twitter that derogatory remarks were made to him and team-mates Lee Chung-Yong, Darren Pratley and Benik Afobe at The Den.

"Chungy, Pratts, Benik and I had all sorts of things said to us," the England under-21 international tweeted.

"Putting the match aside, it's 2012 in England and people are still shouting racial abuse at a football game!? #Shocking"

"Chungy, Pratts, Benik and I had all sorts of things said to us. The police were standing yards away and did nothing..."

The two clubs are also investigating the striker's remarks.

"Millwall and Bolton Wanderers are investigating allegations made by Bolton player Marvin Sordell that he was subjected to racial abuse by an individual while warming up as a substitute during Saturday's Championship clash at The Den," a Millwall spokesman said. "At this stage, we are trying to find any corroborative evidence we could use to take the allegations forward."

A Bolton spokesman added: "We are now working with Millwall to investigate and the club have informed us that they will speak to the police and match officials.

"Both clubs remain determined that racist behaviour or language will not be tolerated."

An FA spokesman stated: "The Football Association will be investigating the claims."

Sordell also wrote on the social networking site: "Putting the match aside, it's 2012 in England and people are still shouting racial abuse at a football game?"

The former Watford striker, who was part of the Great Britain football squad at London 2012, was an unused substitute as Darius Henderson's 90th-minute winner condemned Bolton to a fourth away defeat of the season.

The Metropolitan Police said any allegations of racist behaviour or racist chanting would be investigated thoroughly.

But it added: "No complaint has been made to police and we are not aware of any complaint to Millwall or to match officials during or after the game."