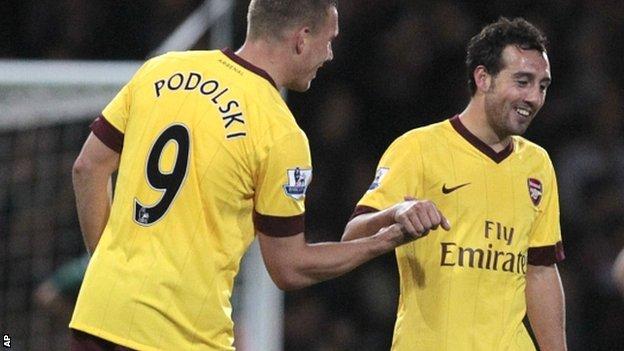 Arsenal boss Arsene Wenger said it is a pleasure to watch Santi Cazorla as the Spanish midfielder's goal helped earn the Gunners a 3-1 win over West Ham.

Wenger's side had to come from a goal down, with the win including a first Premier League goal for Olivier Giroud.

"It is a pleasure to watch him. It's a delight to see what he did on the pitch," Wenger said of Cazorla, 27, who signed from Malaga in the summer.

"I hope every young football player in England watches him."

Cazorla joined Arsenal for a fee of about £15m in August and has quickly adapted to the Premier League with a string of masterful displays.

His goal against West Ham was his second of the season, and was struck from the edge of the box with his left foot, underlining his ability as a genuinely two-footed player.

Even team-mate Theo Walcott, who was on target at Upton Park after Mohamed Diame had opened the scoring, admits he does not know which foot the Spaniard prefers and he trains with him every day.

"He has come to the Premier League and has taken it by storm," Walcott said. "He is our conductor. His goal was fantastic and I'm not even sure what foot is his strongest."

Walcott came off the bench to score his fourth goal of the season, while Giroud registered his first league goal after joining the Gunners in the summer from Montpellier.

And the French striker admitted it was a relief to get off the mark, despite already scoring in the League Cup.

"I'm so happy to score the first goal and to assist my friend Theo," Giroud said. "I hope so many goals come after this. Everyone talked to me about the [lack of a] goal, but I kept confident and concentrated on the work in training and in the games."

The result for Wenger's side puts them back on track after losing to Chelsea last weekend, despite losing Kieran Gibbs to a second-half injury.

And it means they have lost just once in the Premier League this season, after former striker Robin van Persie joined Manchester United in the summer.

Arsenal and have now leapfrogged West Ham in the table to move to fifth ahead of the international break.

"We started [the season] with many questions about us," Wenger told BBC Sport. "But of course we need to build up belief and convince people around us we have a chance.

"Apart from the Chelsea game we have been convincing and we have belief we can do something special."