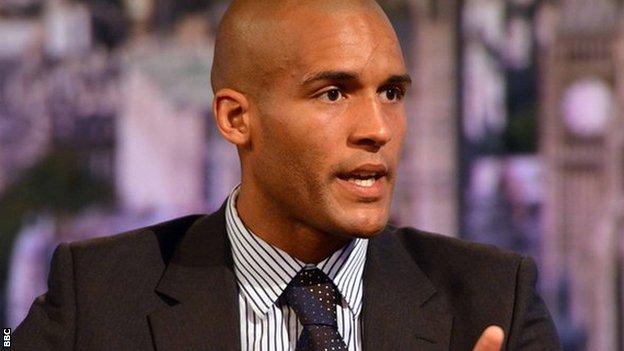 "The Luis Suarez ban sent out a strong message that racism isn't tolerated in the game," Carlisle, 32, said.

"Diluting that with this four-match ban almost undermines the initial message."

Chelsea defender Terry was given the ban on 27 September after an independent FA regulatory commission found that his words towards QPR defender Ferdinand during a Premier League game in October last year were used as an insult.

Terry has until 18 October to appeal against his suspension and £220,000 fine.

Carlisle wants a rehabilitation programme to be imposed in addition to any suspension for a racism offence and the York City defender says Terry should contribute to such a campaign if he does not contest his ban.

Speaking to BBC Radio 5 live's Sportsweek, Carlisle added: "If part of their integration is actively partaking in the anti-discrimination campaigns, in the seminars that go on, not only will they benefit from the information that's shown in these seminars, but also it shows that they do show some remorse for their actions.

"It is also a willingness to contribute to the campaigns moving forward so that other people are aware of the message that's being sent out.

"If he doesn't contest this decision and an appeal isn't forthcoming it would do John Terry's image a lot of good if he was seen to be contributing to these sort of campaigns.

"It would also further affirm the message that this is something that we stand for in football."