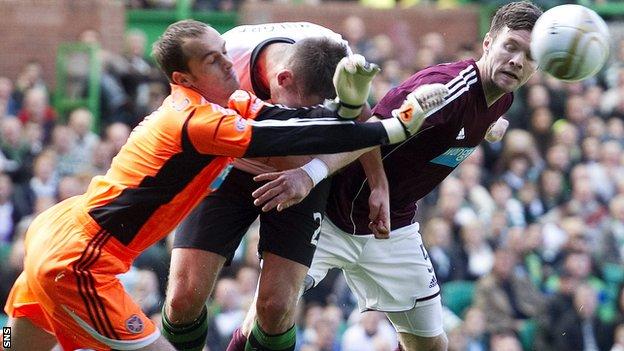 Hearts manager John McGlynn is sure goalkeeper Jamie MacDonald will make a swift recovery from the head knock he suffered in the 1-0 defeat by Celtic.

MacDonald was stretchered off in the first half after colliding with Charlie Mulgrew when punching clear a cross.

"At half-time, he was sitting up no problem," said McGlynn. "The doctor said he took 20 minutes to come round.

"But he watched the second half from the dugout. He'll be observed for the rest of the night, but he is fine."

MacDonald's replacement, Peter Enckelman, was beaten rather easily by a shot from Georgios Samaras on 34 minutes.

Hearts pressed hard for an opening after the interval as Celtic lost their early fluency but could not fashion a good chance until stoppage time when a shot from Andy Driver fizzed narrowly wide.

The visitors had threatened in the first half, with Callum Paterson blazing a great opportunity off target, while Ryan Stevenson and Mehdi Taouil both tested goalkeeper Fraser Forster.

"We came here with Celtic flying and you understand they will have a bit more of the ball and opportunities. However, I thought our guys acquitted themselves tremendously well," said McGlynn.

"We were more than a match for Celtic. We had a great opportunity to go ahead with Callum Paterson and it might have been a different ball game because, not long after that, Celtic scored and the game swung in their favour.

"But our guys didn't panic. I've seen situations where Celtic get a goal and run over the top of you.

"But that didn't happen, our boys passed their way back into the game and kept working really, really hard.

"We had a great opportunity right at the death to get a point and I think we maybe deserved that."