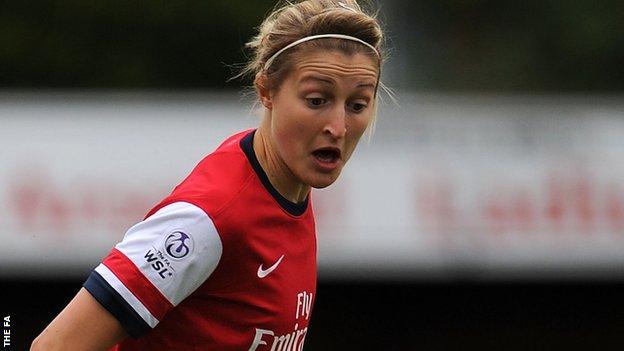 Women's Super League champions Arsenal finished the season unbeaten as they drew 1-1 at Birmingham City on the last day of the campaign.

The point for the Blues meant they clinched second place to join Arsenal in next season's Champions League.

Everton claimed third with a 1-0 win against fourth-placed Bristol Academy, while Lincoln beat Chelsea 3-2 to leap-frog their opponents into fifth place.

Arsenal had to come from behind at Birmingham to ensure they finished the season unbeaten.

Striker Eni Aluko and left-back Kerys Harrop both went close as Birmingham edged possession in the first half, and they deservedly went ahead 12 minutes before half-time through Emily Simkins as the midfielder coolly tucked a 15-yard shot into the bottom corner of the net.

But Arsenal drew level four minutes into the second half as striker Ellen White produced a neat finish from just inside the penalty area.

The two teams will now reconvene on Wednesday for the Continental Cup final, in which Blues will be seeking revenge for last year's final defeat by Arsenal.

A hard fought encounter brought few chances and Everton won the game through a Jemma Rose own goal two minutes into the second half.

The visitors pushed hard in the closing stages but striker Nicola Watts was denied an equaliser by goalkeeper Danielle Hill's fine save from her 84th minute effort.

Lincoln went close to letting a three-goal lead slip after having midfielder Sophie Walton sent off midway through the second half.

In an open first period both sides had chances to opening the scoring before striker Precious Hamilton shot the visitors in front a minute from the interval.

It was 2-0 four minutes after the break, a goalmouth melee leading to midfielder Remi Allen drilling home a close range shot.

And five minutes later the game seemed to be as good as won by the visitors as Hamilton played in midfielder Lucy Staniforth to score the third goal.

But striker Helen Lander reduced the arrears on the hour, firing home a low shot, and when Walton saw red four minutes later a Blues revival looked on.

The Imps held out until the last minute, however, and Dunia Susi's header to make the score 3-2 came too late to save the game.

An expertly volleyed 26th minute goal by midfielder Beth England set the Belles on the road to victory.

Liverpool hit back and pressed for an equaliser, but there was no coming back after striker Aine O'Gorman had netted Donny's second goal in the last minute.