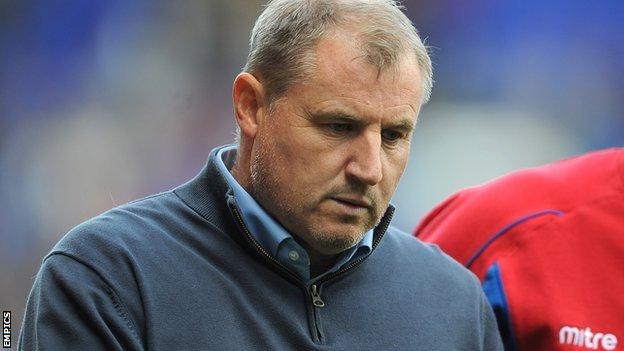 Ipswich Town boss Paul Jewell has been given assurances over his future and expects to be in charge against Hull City in two weeks' time.

extended Town's winless run to nine games and left them next to bottom in the Championship table.

But, having spoken to owner Marcus Evans, Jewell believes he will be leading his side out at the KC Stadium.

Nine to forget for Ipswich

"None of us are happy because we're losing games but it's not as if we're getting battered.

"We're both hugely disappointed but anybody at the game will see we've more than matched a team at the top of the league until we gave a goal away."

Ipswich's only league victory of the season came at Watford on 21 August and since then they have only picked up a further three points - and were humbled 6-0 at Blackpool.

But promising debuts against Cardiff by loan pair who scored a fortunate goal with his hand, and midfielder have given Jewell reasons to remain positive.

"I thought Richie's passing and quality on the ball was there for all to see," he said.

"DJ will get better. He's quick, sharp and strong. It was his and Richie's first competitive match for some time. It was a gamble throwing them in, but at one stage it looked like it was worth taking."

Meanwhile, Michael Chopra was left out of Saturday's squad after he was charges by the British Horseracing Authority over between November 2010 and March 2011..

The striker is a recovering gambling addict.

Jewell added: "It's been another saga hasn't it? I felt with what's gone on this week it was best to leave him out - but don't read anything into that."