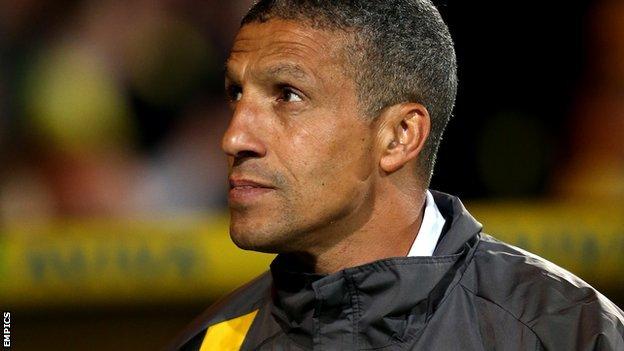 The Canaries a week after going down and are next in action against Arsenal in two weeks.

"Is it a worry? Yes it is. Because we're conceding too many goals," he told BBC Radio Norfolk.

"We have no choice but to do something about it. We need to do that in our next game."

Chelsea became the third side to put four past Norwich his season, following a 5-1 defeat by Fulham on the opening day and last week's thumping by Liverpool.

"Of course I'm concerned. For any team to concede nine goals in two games is a worry," he said, after seeing his side drop to second from bottom.

"It's something we need to do something about. It's about getting back to where we were for the games before that.

"We've had a real test in the last couple of games. I was probably more disappointed last week at home to Liverpool. Because I knew Chelsea would cause us problems and it's about how you cope with it."

Hughton is still searching for his first league win as Norwich boss but plans to draw on promising performances in their other Premier League outings when they took points off Queen's Park Rangers,Tottenham and West Ham and ran Newcastle close in a 1-0 reverse at St James' Park.

And with just four points separating the league's bottom seven sides, the former Birmingham boss believes Norwich have taken solace from the form of their fellow strugglers.

"Where we're fortunate is there are a group of teams around us that have also found it difficult to get points," he said

"We need to make sure we are able to go through a better spell - sooner rather than later."

Meanwhile, Hughton said defender Sebastien Bassong was substituted late on in Saturday's game as a "precaution" following a spell out with a hamstring injury.

"He was touch and go in the week. We took a risk in playing him and he's come through fine," he added.