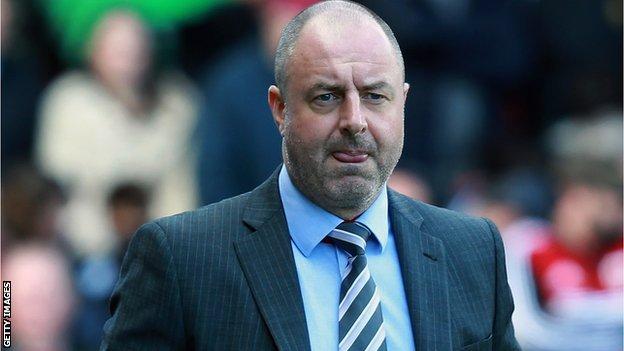 Barnsley boss Keith Hill was outraged by the decision to award Leeds a penalty in the 1-0 loss at Elland Road.

Referee Darren Deadman gave the spot-kick, despite Stephen Foster appearing to foul Lee Peltier outside the box, which was enough to hand Leeds victory.

"It was all down to one major decision the referee has made, and he made the wrong one," Hill told BBC Radio Sheffield.

"He'll probably know now he's made the wrong one by a massive margin."

The 43-year-old continued: "It's altered everything in the match, the fact we were 1-0 down going into the second-half.

"We've lost the game, not because of our performance, but a major refereeing decision he's got seriously wrong.

"When referees don't apologise when they have made a mistake it becomes a little bit disrespectful at times.

"I just wonder if the assessor has told the referee a major decision has decided the outcome of the game."

We've lost the game, not because of our performance, but a major refereeing decision he's got seriously wrong

Following the defeat, the Tykes lie 19th in the Championship after only winning once in their last six league games.

And Hill believes his players need to find a cutting edge to begin to pick up more points.

"We can flatter to deceive and we've got excellent players. We get a lot of credit for our performance, but the end game is the result," added Hill.

"Neil Warnock picks the result up, and I don't - which makes me almost feel numb.

"I do feel we've got encouragement to be successful in this league, but for me, the footballing gods have gone against us."