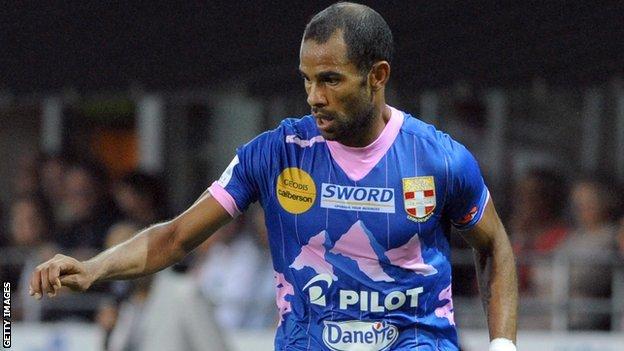 Gabon striker Pierre Aubameyang continued his fine form for Saint Etienne by scoring another goal at the weekend in his side's 4-0 win over 10-man Nancy.

He is now the league's joint-third highest goal scorer with five goals. Nigeria's Simon Zenke was sent-off in the 68th minute for Nancy, who have lost seven out of their eight games so far this season.

Khalifa has also scored five league goals this season. Senegal striker Souleymane Camara was on target with his fourth of the campaign scoring Montpellier's second.

Cape Verde striker Ryan Mendes was on the score sheet for the first time in Lille's 2-0 home win over Ajaccio.

Valenciennes lost a two-goal lead to draw 2-2 away at Toulouse with the Algeria midfielder Foued Kadir scoring the opening goal for the visitors in the 12th minute.

Mali's Cheick Diabate scored for the second weekend in a row with his 68th minute equaliser for Bordeaux who drew 1-1 at Brest.

Youssouf Mulumbu helped heap the pressure on QPR manager Mark Hughes. The DR Congo international scored the third for West Bromwich Albion in their 3-2 win over the struggling London club. Morocco's Adel Taarabt had earlier given QPR some hope with his second goal in as many games.

Arouna Kone set Wigan on their way to a surprise point at home to in-form Everton. The Ivorian, who has now scored three Premier League goals, gave his side the lead with a header. The match ended 2-2.

Mohamed Diame scored his first goal for West Ham as they stole the lead at home to Arsenal. The Senegalese was booked for his goal celebration and was then lucky to escape a second booking moments later with a reckless challenge on Mikel Arteta. Arsenal responded to win 3-1.

Wilfried Bony grabbed a hat-trick for Vitesse Arnhem as they drew 3-3 with Heerenveen, including a 79th minute penalty to salvage the point for his side. The goals mean the Ivory Coast forwars is the joint highest marksman with eight goals so far.

His compatriot Sekou Cisse put Feyenoord ahead in the ninth minute as his side drew 2-2 at Groningen.

Although Getafe played out the last six minutes without their top striker Abdelaziz Barrada, who was sent off, his side managed to secure all the points with a 1-0 win away at Real Zaragoza. Zaragoza's Ivory Coast midfielder Romaric Ndric had been sent off after just nine minutes as his side finished the match with nine men.

Another Moroccan Youssef El Arabi scored from the penalty spot to give Granada the lead in their 2-1 away win at Real Mallorca.

Nigeria's Obafemi Martins played the entire game and scored the only goal of the match in the 22nd minute for Levante who edged out Valencia.

DR Congo's Cedric Makiadi put Freiburg in front in the 36th minute as his side defeated Nuremburg 3-0 at home, to help lift his side to 11th in the league, with their first win in four games.

Senegal striker Mame Birmam Diouf, helped Hannover 96 salvage a point at home in a 1-1 draw with Borussia Dortmund. He came on as a substitute in the 67th minute to equalise with four minutes remaining with his first goal of the season.

Mali midfielder Mamoutou Ndiaye fired home for Gent in added time at the end of the first-half to give them the lead away at Beerschot. But the home side equalised in the 60th minute through Senegal striker Elimane Coulibaly. The game finished 2-2 as both sides grabbed goals in the last 10 minutes.

Nigeria striker Derick Ogbu ended his goal drought with his first goals of the season scoring a hat-trick for Leuven who beat Charleroi 4-0. Gambia's Ebrahima Sawaneh scored the other goal for Leuven, to take him to eight goals for the season.

Central African Republic striker Mouhamadou Habib Habibou scored for the second weekend in a row to help his side Zulte-Waregem beat Cercle Bruges 3-1, despite playing the last 20 minutes with 10 men.

There was anguish for Senegal defender Ibrahima Gueye whose last-minute own goal meant his Lokeren side had to share the points in a 2-2 draw with Lierse. Earlier South Africa midfielder Ayanda Patosi had scored to give Lokeren a two-goal lead before half-time.

Cameroon striker Ernest Nfor sealed victory for Kortrijk in the 70th minute as they defeated 10-man Mechelen 2-0. Senegal's Boubacar Dialaba was sent-off in the 28th minute for Mechelen.

Another Cameroon players Aloys Nong found the back of the net in the 59th minute to equalise for Mons who drew 2-2 with Waasland-Beveren.

DR Congo's Dieudonne Mbokani was not so lucky as he missed a penalty and a chance to equalise for Anderlecht who lost 2-1 to 10-man Standard Liege in the big Belgian derby.

South Africa defender Calvin Ngongca saw only 14 minutes of action for Genk as he was sent-off in his side's 1-1 draw at league leaders Club Bruges.

Senegal's Lamine Diarra scored the only goal of the game as his side Antalyaspor edged out Gaziantepspor 1-0.

Sivasspor came from two goals down to force a draw at home thanks to two goals in the last 10 minutes with the Nigeria striker Michael Eneramo scoring the equaliser in the 87th minute.

Senegal striker Moussa Sow scored the opening goal for Fenerbahce in their 3-0 win over arch-rivals Besiktas.

Vitoria Guimaraes came from a goal down to beat Academica 2-1 thanks to two second-half goals by Algeria striker El-Arbi Soudani.

There was only one African on target but in style as a hat-trick by Mali striker Dramane Traore helped Metalurh Donetsk hammer Kryvbas 6-2.

Anzhi Makhackala have moved to the top of the table for the first time after beating Dinamo Moscow 2-0 with Samuel Eto'o sealing victory with three minutes remaining. The Cameroon striker has taken his tally for the season to seven goals.

Nigeria's Ahmed Musa scored the opening goal in the Moscow derby as his side CSKA defeated Spartak 2-0.

Mali captain Seydou Keita scored one of the goals while Peter Utaka from Nigeria scored ther other two as Dalian Daerbin beat Beijing Guoan 3-1. Utaka is the second highest scorer in China with 19 goals.

Ivory Coast captain Didier Drogba was on once again on target for Shanghai Shenhua who lost 4-2 to Guizhou Renhe.

Zambia striker James Chamanga now has 11 goals for the serason, after scoring twice for Dalian Shide, but it was not enough as his side lost 3-2 away at Liaoning Whowin.

His compatriot and national team captain Christopher Katongo scored in the 71st minute for bottom of the table Henan Jianye, but his side also lost going down 3-1 to Hangzhou.