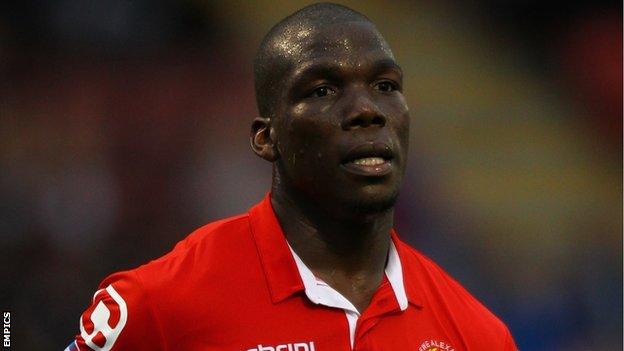 and not having won in six matches, Pogba blasted over the bar before Chuks Aneke and Mark Ellis sealed a 2-1 win.

"It was a big decision and I've learnt a lot from it," Davis told BBC Stoke.

"I want them to take responsibility but, at the same time, it's a case of using common sense."

Pogba was involved in a similar incident last season at his previous club Wrexham when he tried to snatch the ball off his team-mate Jake Speight, who eventually ended up getting it back after a heated exchange and converting the late penalty in a 1-0 win over Ebbsfleet.

And the Crewe boss admits that AJ Leitch-Smith and Luke Murphy would also have been ahead of Pogba in the queue to take one.

"And I'd have been happy for any of the other three to take them rather than the one that did.

"Pogs's all went over the bar, so I was shouting on for Harry to take it as his record's good.

"But Pogs had already got to the spot with the ball in his hand and was reluctant to swap at that point.

"He'd already focused his mind on taking it and he'd got the ball.

"I thought 'as long as he scores I'm not going to say much'.

"But I couldn't wait to get him into the dressing room at half-time and tell him what I thought. We've all learned a lesson from it."