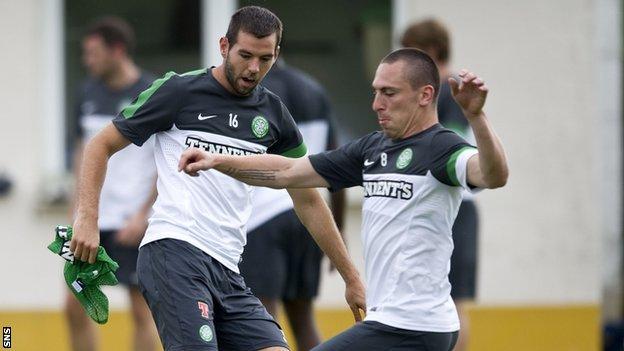 Wales midfielder Joe Ledley believes the head-to-head tussles between four Celtic players will have a major say on the outcome of Friday's World Cup qualifier against Scotland.

Ledley and Adam Matthews could be direct opponents of team-mates Scott Brown and James Forrest at the Cardiff City Stadium in the Group A match.

"These are key battles. We'll need to see who comes out on top," said Ledley.

"We know each other's strengths and weaknesses."

Wales seek their first points of the campaign to reach the finals in Brazil after and .

It has been a disappointing start, too, for Scotland. Their strategy to play two homes games first has not produced the kind of momentum they had hoped for.

Celtic manager Neil Lennon said Brown would only be fit enough to face either Wales or Belgium, the second team Scotland play in October's double-header.

A persistent hip injury makes the combative midfielder's appearance in both unlikely, but if he does feature in Cardiff he should be up against Ledley, while out on the wing Forrest and Matthews will hold their own contest.

Ledley said of Brown: "He has been one of our better players this season.

"He drives his other players on and tries to attack as well.

"Both teams have Premiership players, both are going to be set out to get the three points and hopefully Wales can do it."

Ledley acknowledges the challenge Wales face to make the 2014 finals in a group that has Belgium, Croatia and Serbia on four points from two matches.

However, he knows the national team's recovery must start soon.

"It is a hard group but you have to take it game by game and see how many points you end up with," he said at a Hampden media conference.

"Realistically, it's going to be very hard.

"We have a lot of good players in the team. [The start has been] disappointing but we have been unlucky with players out through injury and hopefully this time we'll have a strong squad back and get three points."

Forrest feels Scotland's chances of victory in the 106th meeting between the countries has been boosted by the return to Craig Levein's squad of Steven and Darren Fletcher, the former from an international football exile, the latter from long-term illness.

"Seeing Steven Fletcher and Darren and Broony back in the squad, they're three big players and it's a boost for the next two games," said the Celtic winger.

"[Steven] is scoring week in, week out in the Premiership and we are delighted that he is back in the squad.

"Both teams have started poorly in the campaign so both teams will want to change that when they play each other."