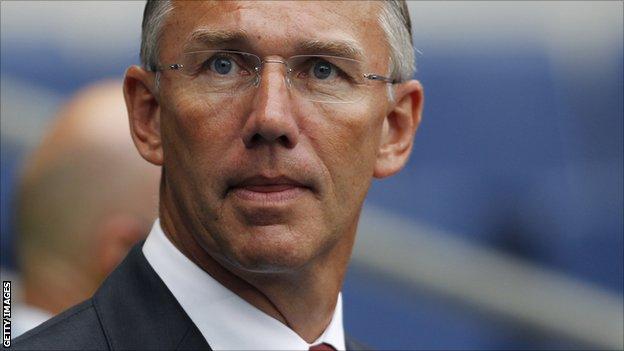 Southampton manager Nigel Adkins says it is time for his side to start learning from their mistakes as their Premier League education continues.

Adkins's side surrendered a one-goal lead for the fourth time this season as they drew 2-2 against Fulham on Sunday.

The result lifted Saints out of the bottom three, but only by a point.

"I keep going on about learning but we need to learn a lot quicker and keep the ball out of the back of the net," Adkins told BBC Radio Solent.

Saints took the lead through defender Jose Fonte before Jos Hooiveld, on as a substitute for the injured Frazer Richardson, diverted John Arne Riise's shot into his own net as Fulham drew level.

Kieran Richardson looked to have won it with a deflected shot two minutes from time, but Fonte nodded in a late equaliser.

"We need to do better," added Adkins, whose side have now conceded 20 league goals.

The inability to keep opponents out has seen Saints boss Adkins rejig his back five in recent weeks and bring in new faces.

Many of those defensive options played in the Championship last season and Fonte has backed their ability to make the step up.

"No-one is more disappointed than us," he said.

"We are very upset with it because last year we had one of the best defences in the league.

"That is something we were not doing last year so I think we can improve massively.

"I think we can keep clean sheets from now on. No doubt about it. It's just a question of concentration and keep working very hard on the training ground."

Meanwhile, Adkins says England Under-21 defender Nathaniel Clyne and Uruguayan midfielder Gaston Ramirez will miss international duty this week through injury, while Richardson is also set for a spell on the sidelines with a thigh problem.

Ramirez could also be set for a lengthy spell.

"Nathaniel has a dead leg and Gaston has a similar thing, but his is quite serious," Adkins told BBC Radio Solent.

"His muscle swelled up on Thursday in training as there was nowhere for the blood to go so there was a lot of pressure building up on the thigh. He had to go to hospital for a couple of days to relieve the pressure."