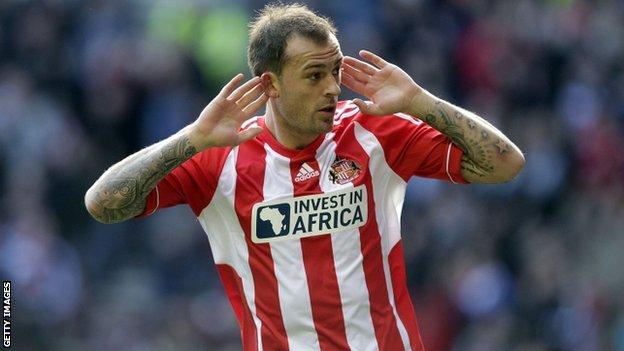 Sunderland striker Steven Fletcher is not guaranteed a start for Scotland despite returning to the national side.

Fletcher said he is "desperate" to help Scotland reach the World Cup after ending his international exile.

However, Scotland assistant manager Peter Houston has insisted no player is guaranteed a start against Wales.

The Scotland assistant boss added: "It's something we've not discussed yet.

"We have games coming up on Friday and on Tuesday and Steven is in that squad. Whether he plays or not, it's far too early to say.

Fletcher had earlier expressed delight at his return to the international fold, having been overlooked after making himself unavailable for the game with Northern Ireland in February 2011.

"Everyone knows it has been too long since we last qualified for a major finals and I want to do my bit to help us reach Brazil," he said.

"I am a proud Scot and it is a privilege to play for my country."

I understand why people want to know what changed, but the truth, as the manager said last week, was that the situation wasn't helping anyone.

Scotland manager Craig Levein decided to include the former Wolves and Burnley forward in his squad for Friday's World Cup qualifier against Wales in Cardiff and next week's game against Belgium.

"I am just happy to be back as part of the squad," Fletcher, who has one goal from eight caps, told the Scottish FA website.

"I had a good chat with the manager when he came to visit at the training ground last week and while it was important we discussed the past and put it to bed, it was more important that we focused on the future.

"I understand why people want to know what changed, but the truth, as the manager said last week, was that the situation wasn't helping anyone.

"I am desperate to play for Scotland again and, like Craig, I regret that it has taken this long to come about. I'm sure we have both done a lot of thinking during the last two years but the country comes first.

"We will be going to Wales looking to win and there is no point looking beyond that game. Our supporters will be there in their thousands and we need their support to put ourselves in contention in the group.

"I can promise them I will give everything I can along with the rest of the squad to qualify for Brazil."

Assistant manager Houston also stressed the unity in the Scotland camp after the return of Fletcher.

"There's been great banter among the players," he said. "He's been welcomed back like we always knew he would.

"Steven's just mixed in like the previous times when he was on board.

"He's a top striker and we need every player we can just now to try and get some good results."

Fletcher has been in excellent form since joining the Black Cats from Wolves in the summer, scoring five goals for the club.

His inclusion will bolster the team's attacking options after stuttering World Cup qualifying performances against Serbia and Macedonia.