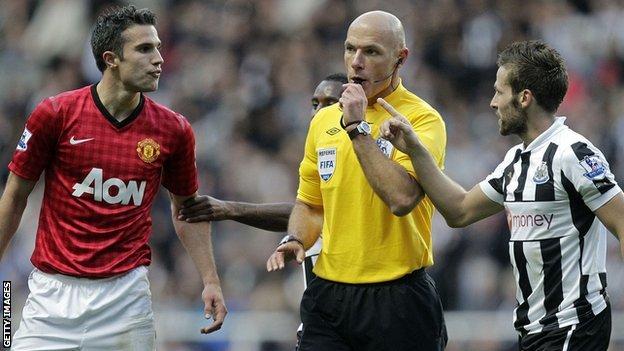 Magpies manager Alan Pardew wanted the Dutchman charged for striking Cabaye with his elbow during Sunday's 3-0 defeat to the Red Devils.

But referee Howard Webb has reviewed the incident and does not consider it to be an act of violent conduct, so no retrospective action can be taken by the FA.

The FA also has no plans to charge Newcastle's Cheick Tiote after the midfielder appeared to stamp on Tom Cleverley's leg during the game.

Pardew said he had not seen the second-half clash involving Van Persie and Frenchman Cabaye when it happened, but had watched it on replay.

"He has looked at Yohan and he has elbowed him," he said. "I think that perhaps needs to be looked at, if I am honest.

"Yohan wouldn't have gone down if he [Van Persie] hadn't done something.

"There's a bit of history from last year and I don't know if Robin has been caught up in that, but that was just a little bit unsavoury," added the Magpies boss.

Manchester United moved up to second in the Premier League table with the win.

"It was an excellent performance," said United boss Sir Alex Ferguson, whose side lost 3-2 to Tottenham in their previous league game and were beaten 3-0 in the corresponding fixture last season.

"We were focused and the concentration was terrific. It's not easy coming to Newcastle. They're a big, aggressive team."

The visitors were 2-0 up inside the first 15 minutes thanks to headers from defenders Jonny Evans and Patrice Evra.

Tom Cleverley then added a third from distance in the 71st minute, although Ferguson believes the midfielder was actually trying to cross the ball.

"I don't think Cleverley tried a shot, but you take these things," said the Scot.

"Newcastle make you play and work," he said. "We handled the aerial stuff they threw at us. Rio Ferdinand and Jonny Evans were terrific."

"We couldn't live with them," he said. "The two goals killed us. However, in the first few minutes of the second half we were terrific."