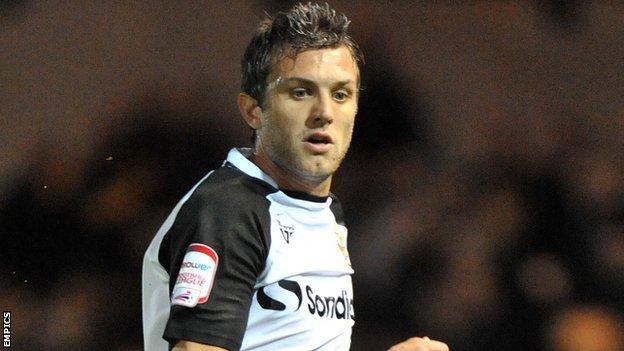 Port Vale skipper Doug Loft could struggle to be back before the end of the month after pulling his calf muscle in Saturday's 2-0 win at Exeter.

The loss of the adaptable midfielder, who is expected to be out for between two to three weeks, overshadowed Vale's fifth away win of the season.

The 27-year-old broke his leg in two places against Tranmere in August last year and has never fully recovered.

The former Bristol Rovers, Forest Green and Oxford United man signed a six-month contract extension back in June, in the hope of winning his battle for fitness, but he has now been forced to quit the game.

We have to make changes, either through injuries or players being very close to suspension

With Vale having moved within three points of top spot, Micky Adams' men can now turn their attention to Tuesday night's Johnstone's Paint Trophy tie at League One side Walsall.

Adams has taken the unusual step of naming his side a day early, to allow Vale fans a fairer chance to decide whether they think it is worth making the short trip down the M6.

"We have to make changes, either through injuries or players being very close to suspension," said Adams.

"Sam Johnson will start in goal. We are going with Adam Yates, John McCombe, Richard Duffy and Rob Taylor in our back four.

Nineteen-year-old shot-stopper Johnson, who stands at 6ft 7ins, will make his first start for the side after earlier signing a one-year deal with the club.