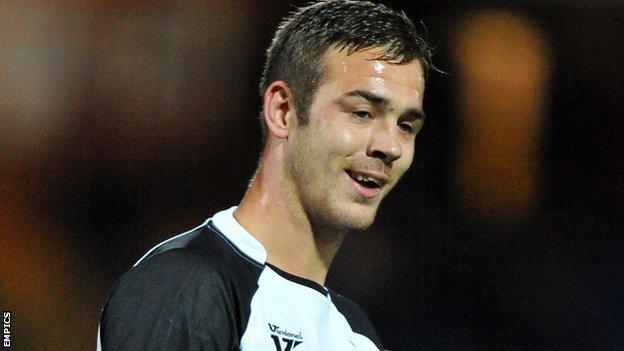 Port Vale striker Tom Pope is grateful for the dual wing supply line that has helped him soar to the top of the scoring charts this season.

"When you play with wingers you know they'll create chances," the 27-year-old told BBC Radio Stoke.

"With that pace, even they don't know what they're going to do with it half the time."

League Two's leading marksman has hit 12 in all competitions - seven of which have come on Vale's travels.

And Pope knows it is no coincidence that opposition tactics are allowing Vale's two in-form wingers Jennison Myrie-Williams and Ashley Vincent more space to cause damage in away games.

Pope's dozen for the season

"It's difficult to get the sort of space you get away from home when we can pick teams off and create chances.

"But, when our two wingers are on their game, they're a pleasure to play with."

While Pope is prepared to give credit where it is due to his team-mates, Vale boss Micky Adams is just pleased at the change in fortunes for the Crewe Alexandra product in his second season at Vale Park since ending an unhappy two years with Rotherham United.

"He's fitter, he looks a lot better in himself, he's a lot more confident than he was last season and he's leading the line great for us.

"I'm just gutted I gave him a goal-scoring bonus at the beginning of the season. Last season he got five and I thought I'd save ground."

"But now it looks like I've cost the administrator a few quid."

Having become the fastest Vale player to reach double figures for the season since 1933, Pope has only netted in two home matches this season, with four coming in one game against old club Rotherham.

Pope's aim is now to find the net more often at Vale Park, where they have won just twice.

"We need to improve at home and find ways of breaking down defences," Pope continued.

"And I'm not going to get carried away with results. I'm going to take each game as it comes."