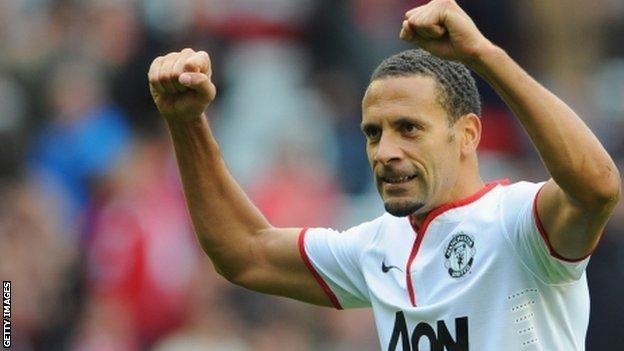 Rio Ferdinand should be recalled by England and could play at the 2014 World Cup, says former Manchester United defender Gary Pallister.

The 33-year-old United centre-back was not in Roy Hodgson's latest squad despite John Terry retiring from international football.

"England lack an authoritative figure in the centre of defence and I think that's what Rio could provide."

Ferdinand, who has won 81 caps for his country, was not selected for Euro 2012 for "football reasons", according to Hodgson.

And he was omitted from Hodgson's latest squad - for the World Cup qualifiers at home to San Marino on Friday and in Poland four days later - despite Terry's retirement.

Terry, 31, who was selected for the Euro 2012 finals in Poland and Ukraine, was charged with racially abusing Ferdinand's younger brother Anton during a Premier League match between QPR and Chelsea in October 2011.

In July, Terry was cleared of the charge at Westminster Magistrates' Court but last month a Football Association hearing found him guilty of racially abusing Ferdinand, banning him for four games and issuing a £220,000 fine.

In England's last match, a 1-1 draw at home to Ukraine, Everton's Phil Jagielka and Joleon Lescott of Manchester City - both aged 30 - were the central defensive pairing. Jagielka was winning his 14th cap while Lescott has played in 23 internationals.

"I'm not saying we've got bad players there but with John Terry retiring, we look inexperienced in defence," said Pallister, who won 22 England caps between 1988 and 1996.

"We've heard nothing to say Rio wants to retire which would suggest he wants to carry on playing for England.

"He's definitely still good enough. His understanding and reading of the game has been one of his biggest strengths. He sometimes makes the game look very easy. Instances like him getting isolated against Tottenham's Gareth Bale are very few and far between.

"I think he just knows the game inside out. If he stays fit and injury free then he could play a part in the World Cup at 35. He's a good organiser, he's a very accomplished player and at international level, sometimes the game's a bit slower as well, which might help."

Last week Hodgson apologised to Ferdinand for discussing the defender's future during a journey on the London Underground, but club manager Sir Alex Ferguson is content to see him out of the England squad and concentrating on United.

Pallister acknowledges it might be difficult for Hodgson to change his mind over the player, but believes he can still play a part at international level.

"I can understand where Roy Hodgson's coming from in terms of preparing for the next World Cup and it may be very difficult to go back and ask Rio to play, but in terms of ability, I think it's a no-brainer," said Pallister, who was speaking at an event to mark 90 years of the Football Pools.

"Rio is still playing at the top level, he's a class act and could still offer a lot for England."