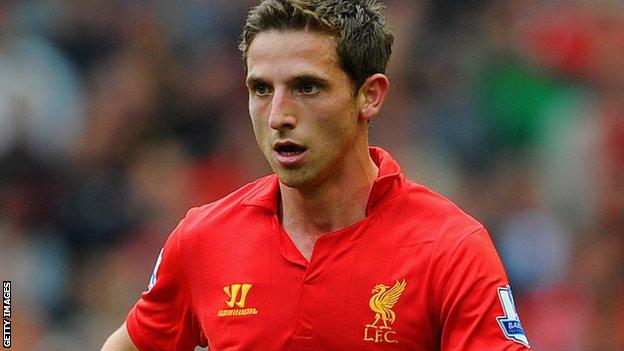 The 22-year-old midfielder impressed during Swansea City's first season in the Premier League.

During the summer he followed Swansea manager Brendan Rodgers to Liverpool in a £15m deal.

Allen, a regular for Wales, also represented Great Britain at the Olympic Games.

Celtic defender Adam Matthews was named the young player of the year, an award which Allen won last year.

The awards, voted by journalists and broadcasters, cover the period from October 2011 to October 2012 and were presented at a dinner at the National Museum of Wales in Cardiff.

Carmarthen-born Allen has been recognised following a year in which he played a prominent role in Swansea's impressive first season in English football's top flight.

Allen also established himself as a regular in the Wales midfield after making his first start in October 2011 during the reign of late manager Gary Speed - a 2-0 win over Switzerland in a Euro 2012 qualifier.

He was one of five Welshmen, along with Craig Bellamy, Ryan Giggs, Aaron Ramsey and Neil Taylor, who represented Great Britain in the Olympic football tournament.

Allen played in all five matches for Team GB, who lost on penalties to South Korea in the quarter-final at Cardiff's Millennium Stadium.

Following his involvement at the Olympics in August, Allen joined Liverpool for a £15m - a record transfer fee for a Welsh player.

Tottenham's Gareth Bale won the fans' player of the year award for the second year running.