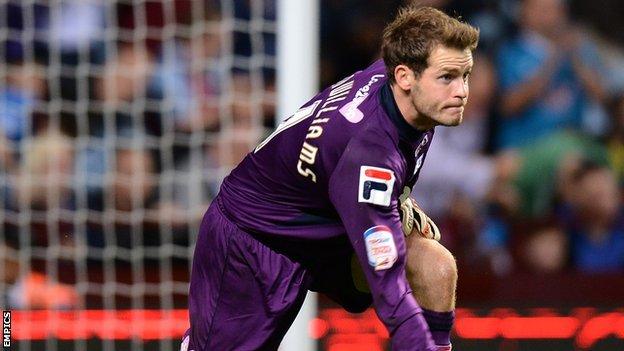 Williams is the only one of the three goalkeepers in Wales manager Chris Coleman's squad currently playing regular first team football.

The 25-year-old has kept six clean sheets in the 11 game unbeaten run which has put Rovers four points clear at the top of League One.

Goalkeeping is not just about shot-stopping, it's also about how you control what's going on in front of you so you don't have to make a save in the first place

Wales play World Cup qualifiers against Scotland in Cardiff this Friday and against Croatia in Osijek the following Tuesday.

Gareth Bale, Joe Ledley and Adam Matthews all missed Wales training on the Tuesday ahead of the visit of the Scots to the Cardiff City Stadium.

The goalkeeping position has developed into a problem for Coleman since first-choice Wayne Hennessey ruptured his cruciate knee ligament in April.

Neither of the other two goalkeepers in Coleman's squad, Jason Brown of Aberdeen and Lewis Price of Crystal Palace, are regular starters for their club, leaving Williams in pole position to start.

"It's a great opportunity for me," said Williams after Tranmere's latest win, away at Notts County.

"I've wanted to play for my country since I was a boy, and it'll be a massive thing for me if I get the nod.

"My form is good because I'm working very hard every day - [Tranmere goalkeeping coach] Dave Timmins is a big part of that, he's always on my back pushing me, working on my game.

"Goalkeeping is not just about shot-stopping, it's also about how you control what's going on in front of you so you don't have to make a save in the first place.

"But it's also because I'm enjoying my football with Tranmere. Who wouldn't? We're top of the league, 11 games unbeaten, and have kept six clean sheets."

Williams, who comes from Penygroes in Gwynedd, has already represented Wales from U17 to U21 level.