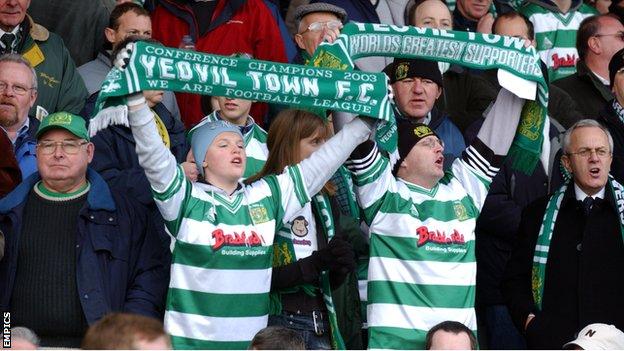 The League One outfit recorded their lowest ever Football League crowd of 3,002 for Saturday's 3-1 win over Colchester at Huish Park.

The Glovers' victory over the U's ended a run of six consecutive defeats.

"We are concerned, along with the rest of the Football League," Starnes told BBC Somerset.

"There's a general trend that they are lower this season.

League One attendances have averaged 6,190 after 10 games of the current campaign, compared with 7,528 last season.

Yeovil attracted an average 3,984 gate during the 2011-12 season and finished 17th in the league standings - 11 points above the relegation zone.

Their largest crowd so far this term came in the 1-1 draw with Coventry, in which 6,006 fans were in attendance, and they currently sit 13th in the table.

Yeovil in the Football League

"We're seeing people picking and choosing the games that they attend," continued Starnes.

"The game on Saturday [against Colchester] was entertaining and the 3,000 or so who were here enjoyed it and I'm disappointed for the people that missed it.

"All we can do is keep plugging away."

Yeovil are in the process of applying for planning permission to expand their Huish Park home, which currently has a capacity of 9,665.

And Starnes believes their attendance figures will increase if they can offer improved facilities to fans.

"We need the development to improve the facilities all round," he added.

"If you look at other clubs who have moved or improved their facilities, they've seen a rise in attendances because people have been more willing to go to the matches.

"We are doing all we can with the resources that we've got."