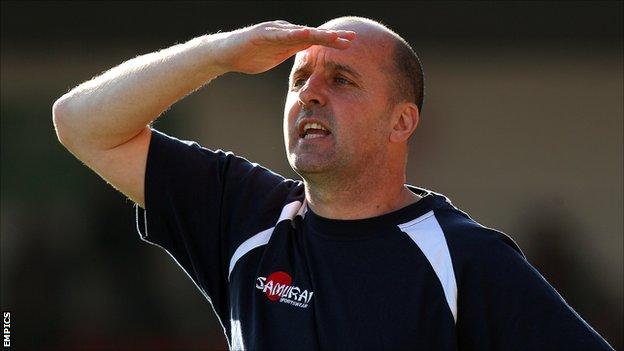 Cook, who joined Accrington from League of Ireland side Sligo Rovers in February, has signed a two-and-half year contract at The Proact Stadium.

"It's a fantastic club with a great infrastructure and I'm really looking forward to the challenge," Cook told the Spireites club website.

Cook, 45, replaces John Sheridan, who was relieved of his duties in August.

Chesterfield chief executive Chris Turner said: "Paul did a fantastic job in Ireland and has done well with a very small budget at Accrington.

"He's very hungry to succeed and hopefully the change of direction will bring success to the club."

Accrington managing director Rob Heys told BBC Radio Lancashire: "It's disappointing that Paul's going, but I'm not disappointed in him.

"He's done a lot of good things at the club. He'd got a young, hungry side together and we were looking forward to perhaps doing something.

"Paul's going, but the players are still there and the changes he's put in place are still there. There's no reason why we shouldn't build on what he's done and do something good this season."

A statement on the Accrington website said a compensation package had been agreed between the two clubs.

Cook led Accrington to just eight victories in his 33 matches and lost his last four games.

Tommy Wright has been in caretaker charge of the Spireites since Sheridan's exit but four wins from his 11 games has not been enough to see him given the job permanently.

Turner added: "I'd like to thank Tommy Wright and Mark Crossley, who have done excellent jobs in very difficult circumstances over the last couple of months. I'm delighted that they are staying."

Cook spent five years as manager of Sligo, winning the FAI Cup twice (2010 and 2011) the League of Ireland Cup (2010) and finishing runners-up in the Airtricity League (2011) before returning to Stanley, where he had finished his playing career.

His first game as Chesterfield boss will be Saturday's home clash with the Football League's bottom side, Barnet.

The Spireites were one of the favourites for promotion at the start of the campaign but currently sit in 13th place, seven points off the top three.

Meanwhile, Stanley are now faced with the task of searching for a new manager for the second time this year.

Cook's assistant, Leam Richardson, will take charge of Accrington for their League Two game at home to Bristol Rovers on Saturday.