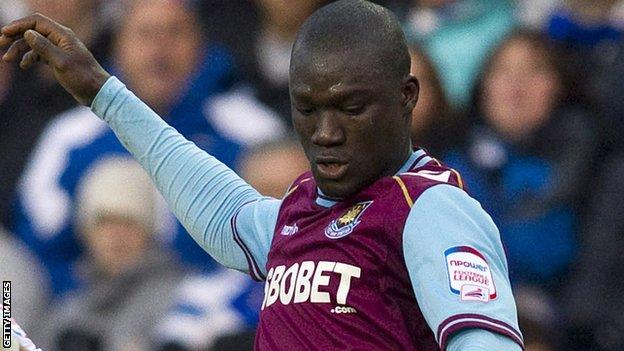 After training with Blues for the past few weeks, the 34-year-old ex-Senegal international has passed a medical and will sign a one-month contract, subject to a successful visa application.

He spent three seasons at Craven Cottage, where he was a team-mate of Blues manager Lee Clark.

He then moved to Portsmouth in 2008, where he won the FA Cup in his first season with the club.

Having lifted the 2011 Greek Cup during a year-long spell with AEK Athens, he returned to England last season with West Ham.

He played 16 times but rarely figured after Christmas in the Hammers' promotion run-in and was released in the summer.

We brought Ravel Morrison in because he's a talented young man, but there's more than talent that gets you in the team

Diop represented Senegal in four Africa Cup of Nations finals, as well as helping them reach the 2002 World Cup quarter-finals.

As well as Diop's arrival, Clark has made it clear there is still a place in his squad for summer loan signing Ravel Morrison, 19, despite media speculation to the contrary.

"I had a good chat with Ravel this week," said Clark. "He knows where he wants to be and he knows how he's got to get there.

"We brought him in because he's a talented young man, but there's more than talent that gets you in the team.

"Ravel understands that. He's going to be working extremely hard over the coming weeks to get that sorted."

Meanwhile, Birmingham have decided not to appeal against Nikola Zigic's red card in Saturday's 1-0 defeat by Huddersfield Town.

The Serbian striker was sent off for a high challenge on Huddersfield full-back Callum Woods and will not play again until November, missing the home game against Leicester and trips to Millwall and Leeds United.

Young Blues defenders Mitch Hancox, who made his debut last Saturday as a late substitute, and Jack Deaman have both signed six-month contract extensions, tying them to the club until June 2013.