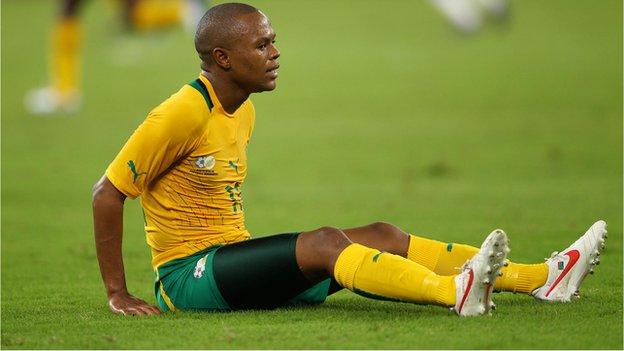 South Africa midfielder Thulani Serero is likely to miss the 2013 Africa Cup of Nations in his home country because of a groin injury suffered last month.

The 22-year-old, who plays for Ajax in Netherlands, was injured during a match against ADO Den Haag on 23 September and has been ruled out until January.

"We don't expect him to recover in time and take part of Africa Cup of Nations with Bafana Bafana," said Ajax.

"Even if he recovers quickly, both the club and the player remain cautious."

The club added: "Thulani overcame a series of small injuries last campaign and was becoming a regular for Ajax this season, so this latest problem is particularly difficult for him."

Serero's absence would be a major blow for South Africa, particular after captain Steven Pienaar's recent decison to retire from international football.

It would mean the loss of two key midfielders and would seriously dent Bafana Bafana's chances of success on home soil.

While Dutch giants Ajax are pessimistic about Serero's odds of taking part in tournament, they believe the player has the right qualities to come back stronger.

"Thulani is a great footballer and a great person. He has the right mentality to succeed," said the club.