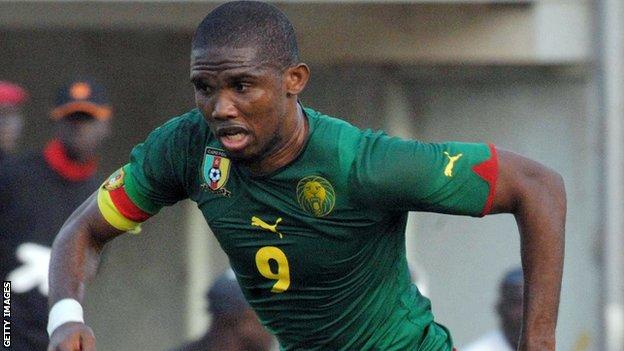 There were more shocks on the second day of the second-leg final-round ties of 2013 African Cup of Nations qualifiers on Sunday.

Seven ties were concluded on Saturday and, among the eight to be played on Sunday, Cameroon suffered a mighty upset when they lost to Cape Verde, who qualified for the tournament for the first time.

Elsewhere, Ethiopia produced an excellent comeback to go through along with Angola and Niger.

The tiny Cape Verde Islands knocked out former World Cup quarter-finalists Cameroon to pull off one of the biggest shocks in the competition's history, despite defeat in Yaounde.

Cape Verde - a country with a population of about 500,000 - had won the first tie 2-0 and they strengthened their position after only 22 minutes of the return game when Portuguese-based striker Heldon scored with a free-kick.

Cameroon were level minutes later through Achille Emana but still needed three more goals to overturn the aggregate deficit - a task that seemed beyond their dispirited performance.

The hosts got their second goal four minutes into stoppage time when 16-year-old substitute Fabrice Olinga came on to convert a Samuel Eto'o cross.

The return of four-time African Footballer of the Year Eto'o and a change of coach ahead of the second leg did little to resurrect Cameroon's fortunes.

They now miss out on the Nations Cup for a second successive tournament, suggesting the era of a regular role as one of African football's superpowers is at an end.

Cape Verde toyed with their much-vaunted hosts at times, passing the ball around at pedestrian pace in the second half to waste time.

Ethiopia go through on away goals.

The Ethiopian Black Lions booked their place at the Africa Cup of Nations for the first time in 30 years as they earned reward for a patient approach in Addis Ababa.

Sudan won an exciting first encounter 5-3, thanks to a late Mohamed Al Tahir brace, and were barely troubled during the first half at the national stadium in the heart of the Ethiopian capital.

But as the hour mark passed without a goal and it was looking good for the visitors, Adane Girma and Saladin Seid both scored to turn the match on its head to the delight of a capacity 30,000 crowd.

Fifty years ago Ethiopia won the Nations Cup and now they have won the right to try to do so again.

Angola go through on away goals.

Striker Manucho scored twice early on in Luanda to secure victory for Angola in the second leg of their tie as the hosts completed a superb comeback from their 3-1 first-leg defeat.

The Palancas Negras made a flying start and Manucho bagged his brace within six minutes to draw his side level on aggregate.

Angola wasted chances to add to their tally and make their passage more comfortable, with Mateus Galiano guilty of a second-half miss and Djalma failing to make the most of a one-on-one chance when clean through.

So strong at home, the Mena were frustrated by the visitors until the closing stages - with the Syli Nationale eyeing up qualification as they led 1-0 on aggregate with just 20 minutes of the tie left.

However, Mohamed Chikoto opened the scoring to level things up at 1-1, whereupon the possibility of penalties loomed large.

Just as the fans were readying their nerves for a shoot-out, Boubacar Issoufou fired home in the dying minutes to secure a famous turnaround victory for Niger - who have now qualified for more Nations Cups in the last year than Nigeria and Cameroon combined.

Togo edged out Gabon in another tight match between the sides, following their 1-1 draw in the first leg.

Wome Dove put the hosts ahead and Tottenham striker Emmanuel Adebayor doubled the lead to place Togo in control.

Pierre-Emerick Aubameyang grabbed a late goal for the visitors and ensured there were some nervous moments for the home fans but Togo held on to go through by a single goal.

It means Togo will be at the Africa Cup of Nations for the first time since they withdrew from the tournament in Angola in 2010 because of the fatal gun attack on their team bus in Cabinda. They failed to qualify for the 2012 edition.

DR Congo arrived in Equatorial Guinea, one of the co-hosts of the 2012 Nations Cup, with a comprehensive 4-0 lead from the first leg but qualification began to look less certain as the National Lightning swiftly halved the deficit in the opening period.

Javier Balboa opened the scoring after 23 minutes and when Ben Konate added a second 12 minutes later, the prospect of a highly unlikely comeback became ever more realistic.

But midfielder Youssouf Mulumbu struck two minutes before half-time to give DR Congo a 5-2 aggregate lead, which is how it ended as the Leopards returned to the finals for the first time since 2006.

Central African Republic took a shock early lead before Alain Traore replied to make it 1-1 with a quarter of the game gone, at which the point the visitors led 2-1 on aggregate.

Just seconds before the break, the Stallions made it 2-2 on aggregate when striker Moumouni Dagano converted a crucial penalty.

At the end of the second half, Central African Republic were on the verge of their first Nations Cup qualification until their dream was ripped away from them by Alain Traore - who scored his second deep into stoppage time to ensure that the 1998 tournament hosts will be contesting their third finals in a row.

Algeria returned to a competition that they missed earlier this year with a comfortable 2-0 win at home to 2012 qualifiers Libya, with the 1990 African champions qualifying 3-0 on aggregate.

The Mediterranean Knights would have hoped to avoid an early goal to keep themselves in the tie but, within 10 minutes of the game in Blida, their hopes were as good as over.

Even though Libya hit the crossbar in stoppage time, there were no further goals as Algeria became the 15th - and last team - to join hosts South Africa in next year's finals.