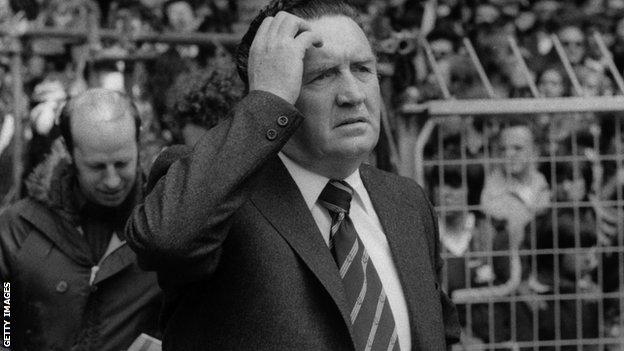 On 10 September 1985, legendary Scotland manager Jock Stein died at Ninian Park in Cardiff, immediately after Scotland drew with Wales on the way to qualifying for the 1986 World Cup.

As the two countries prepare to meet once again in a World Cup qualifier on Friday, former Scotland international Pat Nevin recalls that tragic evening and looks back on Stein's career, for a special BBC Radio 5 live programme to be broadcast on Tuesday evening:

Clearly, winning nine Scottish titles in a row and a plethora of domestic cups, as well as having been the manager of the first British team to win the European Cup is part of the reason for this reverence, but there was more.

On 10 September 1985, Scotland faced Wales at Ninian Park needing at least a draw to secure a place at the 1986 World Cup.

Mark Hughes gave Wales the lead in the 13th minute and Scotland looked set to miss out on one of the two qualifying places, before Davie Cooper converted an 81st-minute penalty.

During the goal celebrations, Scotland manager Jock Stein collapsed on the track and died from a heart attack on the physiotherapy table in the away changing room.

Stein was the most impressive individual I have ever met and many of those who knew him, worked for him or simply met him, however briefly, felt the same.

What made him so successful, so charismatic and so universally worshipped?

The force of his personality was legendary, his intelligence unparalleled and his football knowledge almost mythical.

Originally a miner with no education to speak of, he managed to transcend a sport, become arguably the most innovative force within it and then continue to influence it for decades thereafter.

By meeting people who knew him and worked with him throughout his life I have tried to get an idea of the secret of his colossal effect.

Just take a look at how many Scottish managers have succeeded at the top level in England from Kenny Dalglish, Walter Smith, Gordon Strachan and Graeme Souness to David Moyes, Owen Coyle, Alex McLeish and even the latest in the line, Steve Clarke at West Brom.

It is surprisingly easy to trace a direct line of influence back to Big Jock.

Stein is often grouped with Bill Shankly and Sir Matt Busby, but the links to quite so many modern managers are harder to trace with these other legends, even though their greatness is not questioned.

So why was it Stein's influence seemed stronger than theirs?

Sir Alex Ferguson was an open devotee of the man he was assistant to when he died on that tragic night in Cardiff, just as he delivered a World Cup finals qualification to Scotland.

The Manchester United manager is Sir Matt Busby's successor and learned much from him, but it is Stein who Sir Alex is first to pay tribute to when discussing influences.

Gordon Strachan, who played that night in Cardiff, gives insights into the dressing room before that fateful game.

Sean Fallon, Stein's assistant at Celtic, gives a very personal view on Jock's strengths; Hugh McIllvaney, the hugely respected journalist, also joins the show to give an overview and share intimate thoughts on a former friend.

David Moyes and Owen Coyle consider his current legacy and the effect he had on them, even though their meetings with Stein were fleeting.

Anyone who met Mr Stein, as he was known to those in the game, always remembers where they were, what he said and how they felt.

How many people can you say that about in your life?

In the week that Jock Stein would have turned 90 and Scotland are again in Cardiff for a vital World Cup qualifier, I have dug deep to find out about the man, why he became such a revered figure and to see if his influence still resonates to this day in the game he lived and ultimately died for.