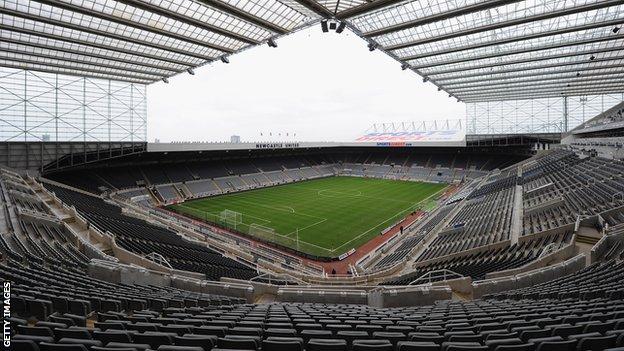 Newcastle's stadium name will revert to St James' Park after the Premier League club agreed a four-year sponsorship deal with a loan company.

Wonga will become the club's main shirt sponsor from next season, replacing Virgin Money, and will also invest £1.5m in the club's academy.

The firm also purchased the stadium naming rights and decided on a return to the traditional name.

The stadium had been called the Sports Direct Arena since November 2011.

The stadium is the oldest football ground in north-east England and has been the home of Newcastle United since 1892. It underwent a £25m transformation in the 1990s before its capacity was increased to more than 52,000 in 2000.

"We listened over the last three days and we saw what really matters to the fans," a Wonga spokesman said.

"Football is an emotional sport and it is obviously really important to them.

"We listened to what they wanted and that is why we did it."

Prior to the announcement, Football Association general secretary Alex Horne expressed some concern that the deal was with a loan company.

He told BBC Radio 5 live's Breakfast: "We are talking to the leagues about it, but on the one hand it's a legislative issue. If these companies are charging the wrong rates of interest then legislation should help us out. The leagues have clear rules about certain inappropriate advertising for children.

"We are talking to the leagues on Friday about it. If you consider it as in the category of things that are inappropriate for children like gambling and alcohol, it feels like it is in that category to me."

Ian Lavery, MP for Wansbeck, is a season ticket holder at Newcastle but has said he will now not set foot in the stadium.

"A city like Newcastle and the region should not have any ties with an organisation like Wonga," he said.

"This business makes profits off the back of deprived people who are desperate and who are the most vulnerable in society."

Mark Jensen, editor of Newcastle fanzine The Mag, said he believes the renaming could have been done to deflect criticism from the club.

"It's a clever move and clearly has been done in part to deflect some of the criticism of the business they have agreed the sponsorship with," he said.

"The fans will be over the moon that the name will be back to what it's always been, but there will be mixed emotions on the subject as it's a sad indictment of today's society that a company like that is doing so well."

Wonga sponsors two other British football clubs. It has deals with Scottish Premier League side Hearts and Championship team Blackpool.