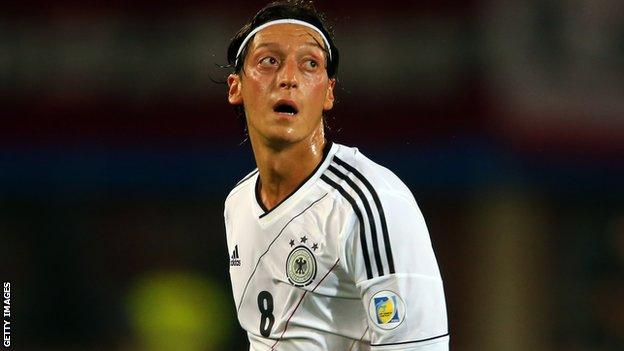 Giovanni Trapattoni is expected to play three central midfielders in an attempt to prevent the Irish being over-run.

"We put three midfielders on the pitch and one midfielder is for Ozil," admitted Tardelli.

Keith Andrews, available again after suspension, and James McCarthy may be joined in midfield by Keith Fahey.

Andrews is certain to replace the injured Glenn Whelan.

Like many of the Republic side, McCarthy struggled in last month's opening 2-1 win in Kazakhstan but should hold on to his starting role while Fahey and Sunderland's David Meyler appear to be battling for the other central midfield berth.

Meyler only won his first cap in last month's win over Oman but is in contention to be pitched into Friday's big game.

"We have two days to decide and during training, we will take the decision," said Tardelli on Tuesday.

"Fahey has good experience and for Meyler, it is very early because it's a very tough match and we need experienced players."

If Trapattoni does opt for three central midfielders, Aiden McGeady and Simon Cox are likely to be handed wide roles with captain Robbie Keane operating as a lone striker.

With Richard Dunne and Sean St Ledger both missing, John O'Shea is expected to switch from right-back to partner Darren O'Dea in central defence.

The Republic's training formation on Tuesday had Fulham's Stephen Kelly operating at full-back with Seamus Coleman and Paul McShane also contenders for the defensive flank role.

Goalkeeper Keiren Westwood did not train with the Republic squad on Tuesday but Tardelli insisted that the Sunderland man will be fit.

The Republic keeper is not currently in the team at Sunderland but Tardelli boss played down the issue.

"Westwood, when he has played with the national team, has always played very well. Maybe it is better to stay on the bench at his club and to play for us."

Republic Under-21 international Conor Clifford was called up to the Irish squad on Tuesday evening.

Chelsea player Clifford has a loan spell at Portsmouth earlier this season.

German coach Joachim Loew is without Mats Hummels, Ilkay Gundogan, Lars Bender and Julian Draxler for the game but the world's number two ranked side are still certain to parade a strong team.