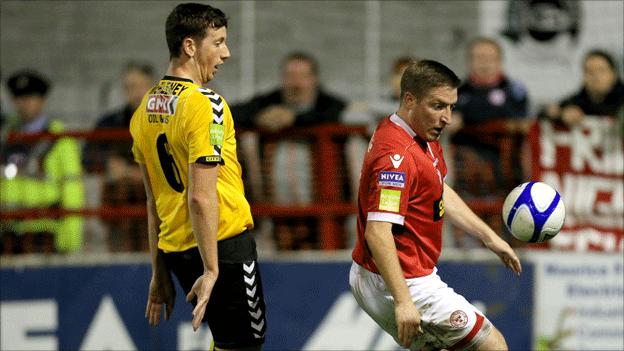 McLaughlin added his second when he picked the ball up outside the box, took a few steps and fired the ball past Chris Bennion in the 62nd minute.

Shels had the best of the early chances, with Kevin Dawson shooting inches wide midway through the first half.

Stephen Paisley had a header saved by Ger Doherty and Philip Hughes then shot past Doherty but saw the ball cannon off the post, hit the Derry goalkeeper and stay out.

Hughes also fired across the face of goal, while Patrick McEleney's low drive for Derry was pushed wide by Bennion.

McEleney also hit the bar with a curling shot, before McLaughlin broke the deadlock before half-time and added a second.

McDaid was denied by Bennion but made no mistake when Barry Molloy provided the pass for the striker to complete the scoring.

The teams had drawn 1-1 in the initial game at the Brandywell on Sunday.

The final will be staged at the Aviva Stadium on Sunday 4 November.