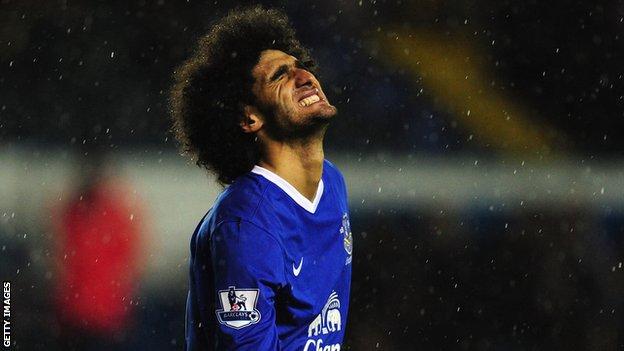 The 24-year-old took a knock to his knee in Saturday's Premier League game at Wigan and had a scan after meeting up with the Belgium national team.

A statement from the Belgian FA confirmed the injury, stating that Fellaini is out for three weeks.

Everton say there "is no estimation" made on the length of his absence.

"Fellaini suffered a small tear at the juncture of muscle and tendon in the knee," read the statement on the Belgian FA's website.

"The injury was revealed during a scan...he will be out three weeks.

"It has been agreed with his club Everton he will rehabilitate in Belgium during this period."

Should the Belgian FA's estimate be accurate, Fellaini would be unavailable for Everton's trip to QPR on 21 October, and would likely miss the Merseyside derby against Liverpool seven days later.

Fellaini has played a key part in Everton's impressive start to the season.

David Moyes's side are fourth in the Premier League following four wins, two draws and just one defeat.

Fellaini, who joined Everton in 2008, has played in every league game so far, scoring three goals, including the winner against Manchester United in August.

Striker Romelu Lukaku, on loan at West Brom from Chelsea, will also miss Belgium's double-header through injury, while Vincent Kompany and Axel Witsel are fitness concerns for manager Marc Wilmots.