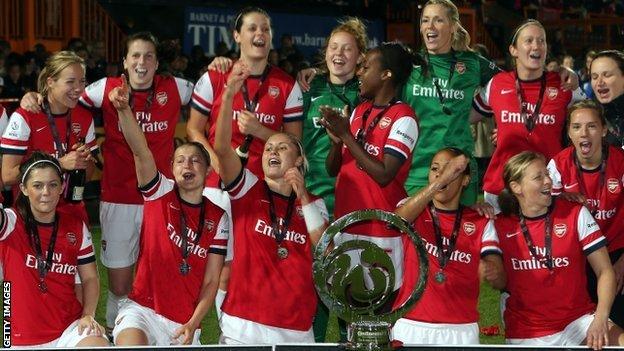 In a repeat of last year's final, the Gunners were well worth their success.

We're sick of Arsenal winning trophies, but we have got a big one ourselves this year and hopefully we can get more next season."

The holders had to wait until the final eight minutes for the winner - a delightful 20-yard shot into the top far corner of the net from Little.

"We made hard work of it but had that little bit extra and deserved the win," said Arsenal manager Laura Harvey.

"In the end though, it was going to take a moment of quality to win the game and fortunately Kim Little provided that with a great goal.

"We've been disappointed not to win the FA Cup this season, but we've now got two domestic trophies in the bag and we're in the last 16 of the Champions League so it's still been a good year for us."

Three days after the teams had ended the Women's Super League season with a 1-1 draw that confirmed Arsenal as champions and Birmingham as runners-up, Blues again had to settle for second best.

Blues boss David Parker, whose team were this year's FA Cup winners, said: "We had a couple of chances, but Arsenal were the better team.

"We had a game plan that we'd put together, but after working hard and doing well in the first half we never got going in the second half.

"We're sick of Arsenal winning trophies, but we have got a big one ourselves this year and hopefully we can get more next season."

A crowd of 2,535 were at Barnet's Underhill to watch a game controlled for long spells by the Londoners, though Blues had their chances.

But as Arsenal began to take control, midfielder Steph Houghton and right-back Alex Scott both had goalbound efforts blocked.

Houghton then had a shot fumbled wide by goalkeeper Rebecca Spencer before striker Kelly Smith hit the bar with a 30-yard free-kick.

An Arsenal goal looked likely but, in a Birmingham breakaway three minutes before half-time, keeper Emma Byrne had to make a fine save from Aluko's angled shot.

The Gunners continued to dominate possession after the break but still had to be aware of their counter-attacking opponents.

They were caught out just after the hour, when striker Rachel Williams chased a long ball out of defence but, after rounding Byrne, shot wide of the post.

Smith went close with another long-range free-kick in the 68th minute, Spencer flinging herself to her left to push the ball past the post.

Five minutes later the Blues keeper had to pick up the pieces after right-back Chelsea Weston had blocked central defender Gilly Flaherty's header on the line.

But Spencer could only watch and hope as a ferocious 20-yard drive by Arsenal captain Katie Chapman thudded against a post.

The goal the Gunners had threatened finally arrived when Little curled a delightful shot into the top far corner.

Having taken a deserved lead, however, they found themselves having to defend in depth as Blues went all out for an equaliser.

But the holders almost snatched a second goal when substitute Gemma Davison's last-minute shot was hooked off the line by Weston.