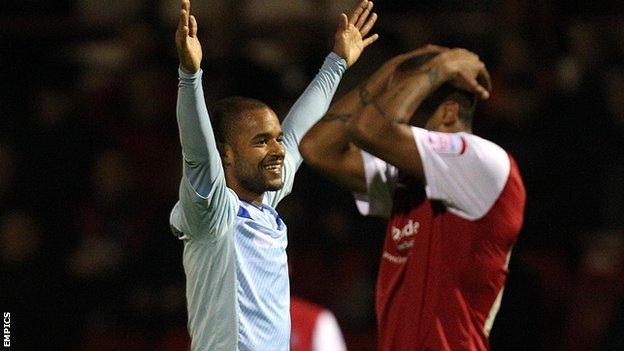 The Minstermen were beaten by second-half goals from David McGoldrick, Callum Ball, a Jamal Fyfield own goal and David Hussey.

"It was ridiculous. I honestly can't believe what I was watching," Mills told BBC Radio York.

"We gave them three goals and you won't win any matches playing like that."

The game was goalless when York were forced into a change early in the second half, defender Chris Doig going off with a tight hamstring.

But his replacement, experienced centre-half Clarke Carlisle, was at fault for Coventry's first goal and left Mills feeling perplexed.

Only he can tell you why he did what he did. I've got no idea what he was thinking

"Only he can tell you why he did what he did," he said. "I've got no idea what he was thinking.

"I lost count of how many chances we created, but we haven't stuck any away and then we've gone and given them goals.

"I'm gobsmacked how we could play so well in the first half and come out and do that in the second half. It just wasn't good enough. Our decision making was diabolical."

Facing the first in a run of four away matches in five games, it was the Sky Blues' biggest win since the 5-1 thrashing of Colchester at Layer Road in April 2008.

"They gave us a really good game first half," boss Mark Robins told BBC Coventry & Warwickshire. "But our effort and organisation was better after the break.

"It was chalk and cheese really. We treated our fans to four goals. And we have to be given credit for working hard and forcing the errors. If that's what we can do, then I'm excited."

McGoldrick's second strike in as many games was his third in the five matches since Robins arrived, making him Coventry's sole top scorer on four goals for the season.

York, who have now failed to score in four of their last five matches, go to Bradford City (15:00 BST).