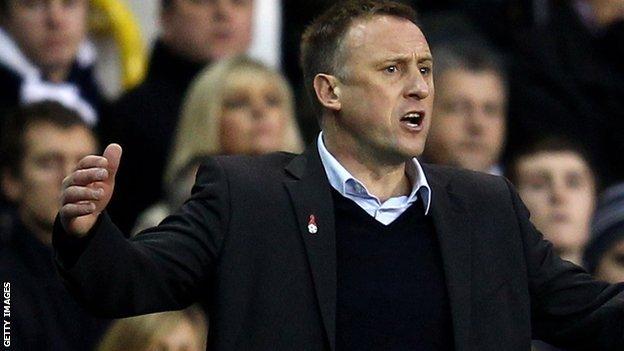 Cheltenham manager Mark Yates has criticised his side's "joke" defence in their 4-2 defeat by Oxford, which saw them exit the Johnstone's Paint Trophy.

The Robins were leading 2-1 at half-time in the second round tie on Tuesday, but goals from Harry Worley and James Constable, and a Peter Leven penalty, sent the U's through.

"We couldn't defend straight balls and, at this level, that's outrageous."

He continued: "When it was going well we looked like a decent team for 65 minutes.

"But we got beat by a set-piece and we don't expect that. We've got some big strong lads and we've let the goalkeeper down.

"A few players have been asking me questions. I got a few answers out there tonight, and not necessarily positive ones."

With captain Alan Bennett suspended, Yates brought in Harry Hooman to partner Steve Elliott at the back and made a further five changes to the side that started the 2-2 draw with Fleetwood on Saturday.

"I thought that team was more than good enough," Yates continued.

"We're out now and people have got to learn from the mistakes that were made.

"We made changes to win the game and freshen it up. I haven't taken that competition lightly.

Yates revealed last week he wanted to sign a midfielder on loan, but suggested he would now turn his attentions to bringing in cover for Bennett, who will be missing for a further two games.

"I've got to pick a centre-half to play alongside Steve on Saturday and I've got some decisions to make," he added.

"I will be actively going upstairs and asking if I can get one in and hopefully I'll get a positive answer.

"I'll do what I can to get both but from what I've seen tonight I have to prioritise the centre-back."