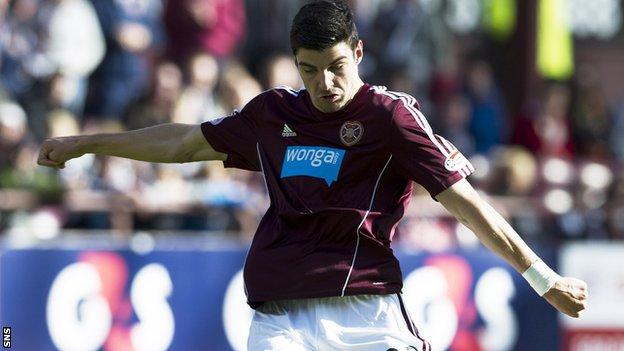 Manager John McGlynn is confident that Jamie MacDonald and Callum Paterson will be fit for Hearts' next match against Motherwell on 21 October.

Goalkeeper MacDonald was stretchered off after a head knock during Sunday's 1-0 loss to Celtic, while Paterson limped out with an ankle knock.

"He's fine, a bit sore still but that's to be expected," McGlynn said of his goalkeeper.

"It was a fair dunt he got but he'll be fine for the Motherwell game."

Paterson, who started the season at right-back but has been playing as a striker in recent matches, was forced to withdraw from Scotland U19s 4-0 win over Armenia on Tuesday.

"It's disappointing for him but he's got plenty of time on his side to go and do well for his country," McGlynn added on the club's website.

"We don't see it being a problem for the Motherwell game, he's healing very quickly and it's got better very quickly.

"There's no indication he'll struggle for the Motherwell game."