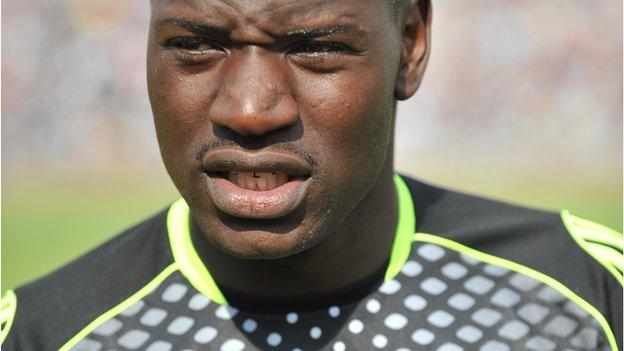 Uganda goalkeeper Denis Onyango says it his time his country achieved qualification for the Africa Cup of Nations again - by beating Zambia this weekend.

The Cranes, who last appeared in the finals of the tournament in 1978, must overturn a 1-0 deficit in the second leg of their final round qualifier against the reigning champions on Saturday.

And Onyango has urged his compatriots to step up and produce the quality required.

"At this moment it's also important that as a team we grow up and achieve something so that we get to the next level," Onyango told BBC Sport.

"Although we lost the first leg, we think we can do it and qualify to celebrate the 50 years of independence for Uganda as a country."

The experienced stopper, who plays for Mamelodi Sundowns in the South African ABSA Premiership, believes Uganda have let down their fans over a number of years.

He is eager to give them a reward for their support and he feels the team can also draw inspiration from the success of compatriot Stephen Kiprotich, who won Olympic gold in the marathon at the London 2012 Games.

"The fact that Stephen won Uganda's first Olympic gold medal after 40 years makes us we believe we can also achieve success," Onyango said.

Uganda coach Bobby Williamson said he is very happy with the high level of competition within the team and added that picking the starting 11 will be a difficult task.

Williamson's options are boosted by the return of attacking duo Geoffrey Massa and Brian Umony, who missed the first leg because of injury.