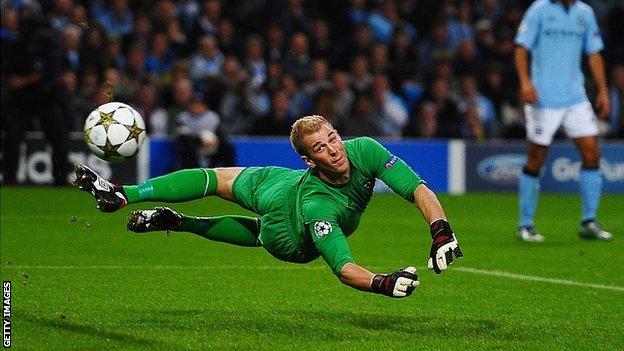 Joe Hart says he is not getting carried away by the praise which followed his excellent performance in Manchester City's 1-1 Champions League draw with Borussia Dortmund last week.

After the game, Manchester United striker Wayne Rooney described Hart as the best goalkeeper in the world.

"It's a special honour for some special people to say some nice things, but we move on," said Hart.

"In goal, you can be the worst in the world two days later."

Hart, 25, made numerous spectacular saves as City kept the German champions to a 1-0 lead before equalising through a last-minute Mario Balotelli penalty to secure a vital point.

Former Shrewsbury keeper Hart, speaking ahead of England's World Cup qualifier with San Marino at Wembley on Friday, added: "You've got to remain level-headed. If you don't, it's a big slap when you do something wrong.

"People are going to say bad things about you but that's football. You can't go too far one way or the other or you leave yourself vulnerable."