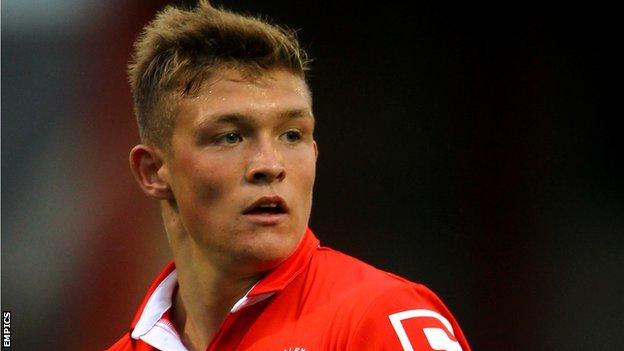 "As a schoolboy, he has always been my favourite player," the England Under-19 international told BBC Stoke.

"To get mentioned in the same sentence as Michael Owen is unbelievable.

"To be compared to him is brilliant. It gives me belief. If people think I'm like him, hopefully I can be a good player too," added the 18-year-old.

The fact that Owen is now plying his trade just a few miles down the A500 from Crewe at Stoke helps encourage the comparisons between Clayton and the former Liverpool and England goal machine in his youth.

And, with similarly fair hair, height (Clayton, at 5ft 9ins is an inch taller), build and pace, not to mention their shared Cheshire roots, those comparisons are perhaps inevitable.

But Clayton, who ended a month-long drought to score Crewe's winning goal in the Johnstone's Paint Trophy at Shrewsbury on Tuesday night, insists that there is a bit more to it than that.

"There are differences to our game," he said.

"The way that Michael Owen plays is exactly how Dario Gradi wanted me to play when he first put me in the team, playing on the shoulder and scoring the goals.

"But, for some reason, as I've come through the system, I've liked to drop off and get the ball a bit more."

After making his debut as a 16-year-old under then boss Gradi in April 2011, Clayton first caught the eye when he scored on his first start, also in the Johnstone's Paint Trophy, against Macclesfield a year ago.

And Clayton's latest effort against Shrewsbury will have done little to discourage the army of scouts flocking to Gresty Road.

"It was a great finish," said Crewe boss Steve Davis. "And it's one which will give him no end of confidence.

"I told him just to play his game, keep making the runs and getting into position and the goals will come."