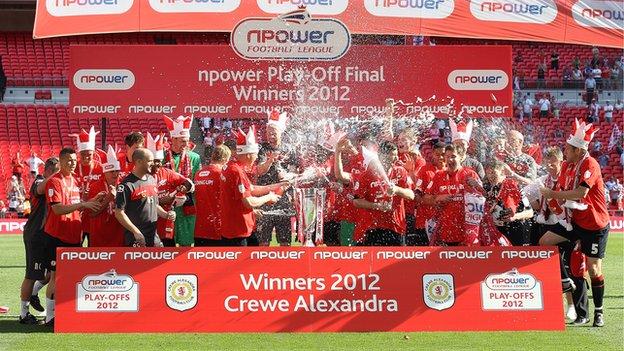 Crewe Alexandra manager Steve Davis has thrown out a challenge to his team to earn another trip to Wembley in the Johnstone's Paint Trophy next April.

The Alex reached Wembley for a third time when Davis's men won promotion to League One by beating Cheltenham in the League Two play-off final in May.

Davis got there as a player too, with Burnley, beaten 2-0 by Wolves in the 1988 Sherpa Van Trophy final.

"I've been to the final and lost. I'd love Crewe to get there too," he said.

"Crewe have never won this and that's the challenge I've thrown out to them.

"It's another trip to Wembley. A great stage. The players should want that," he told BBC Radio Stoke.

After last week's 2-1 second-round win at Shrewsbury, Crewe were paired in Saturday's draw against Doncaster Rovers in the Northern Section quarter-finals, in early December.

That will come almost 10 years to the day since goals from Dean Ashton (3), Rodney Jack (2), David Vaughan, Steve Jones and Kenny Lunt generated an 8-0 thumping of Doncaster at Gresty Road, in what was then the LDV Trophy.

But Rovers got their revenge four seasons later when, in the first year of the renamed Johnstone's Paint Trophy, a last-minute winner earned a 6-5 two-legged aggregate Northern Area final victory in front of 12,561 at the Keepmoat Stadium.

This year's clash is due to be the second of two meetings with Dean Saunders's side inside a month, as Crewe are due to visit the Keepmoat in League One action on 3 November.

But the form his side showed at Shrewsbury has encouraged a feeling of confidence in Davis, who took over at Crewe in November 2011 - just a week after last season's Trophy exit.

"It's a competition that you've got a chance in as there are no big clubs involved," he insisted.

"We could have a really good run in it."