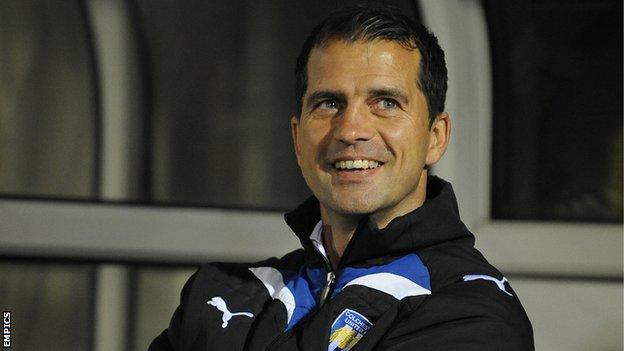 Colchester boss Joe Dunne was left annoyed and frustrated by his side's defensive lapses in the 2-1 Johnstone's Paint Trophy defeat by Northampton.

The U's led 1-0 at half-time but conceded two early second-half goals to exit the competition.

"It's unacceptable. I won't accept that from defenders," 39-year-old Dunne told BBC Essex.

It would be very easy for me to sit here and say 'we've got to go again'. But the players need to be told that at times

"We've dominated the match in terms of possession. In the first half, we should have been out of sight."

Dunne, who was promoted from assistant manager has won two of his four games in charge, but has now suffered back-to-back defeats.

Freddie Sears put the U's in front before youngster Alex Gilbey gave away a penalty on his debut, which Adebayo Akinfenwa converted, and Henoc Mukendi secured victory for the Cobblers in the 54th minute.

"We said at half-time you have to be ready for the onslaught," Dunne added. "Our concentration levels were low and we got rolled over. That's what really annoys me.

"If we'd seen out the first 10 minutes of the second half we'd have gone on to win the game. Because we were comfortable. Maybe we were too comfortable. It's very, very frustrating."

"It would be very easy for me to sit here and say 'we've got to go again'. But the players need to be told that at times. Because it's not the first time it's happened. You have to eradicate these moments."

Colchester's disappointing evening was complete late on when striker Clinton Morrison was sent off for an apparent elbow on David Artell.

Dunne said he would not be making an appeal against the 33-year-old's three-game ban.

"While I don't think there was any contact by his elbow, and definitely no intent or malice, Clinton's arm was above his head and that made the contact," he told the club website.