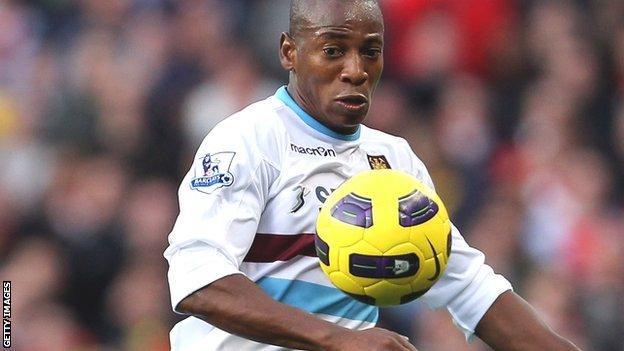 League Two side Chesterfield have signed former Arsenal, Fulham and West Ham winger Luis Boa Morte on a deal until the end of January.

Boa Morte, 35, has played for Portugal 28 times and could make his debut for the Spireites in Saturday's home game against Dagenham and Redbridge.

"It's an absolutely exceptional signing for the club."

He added: "Mark Crossley (goalkeeping coach) played with him at Fulham and bumped into him at a reserve game and asked if he was playing for anyone.

"He's fit and he's ready to go. He might not be able to play a whole game but he is certainly ready to make an impact."

The Portuguese winger has made more than 300 starts in English football since joining Arsenal from Sporting Lisbon in June 1997 and was part of the Gunners' squad that won the Premier League title in 1998.

He joined Southampton in 1999 and then moved on to Fulham before signing for West Ham for £5m in January 2007.

Boa Morte spent four and a half years at Upton Park until he left just before the start of last season.

He then had spells playing in Greece and then South Africa and he had been training with Fulham before joining Chesterfield, who are 13th in League Two.

Spireites caretaker manager Tommy Wright added: "To have a player of Luis's quality coming to Chesterfield is a fantastic coup for us.

"It's great that a player of his ability wants to play football.

"The financial aspect of the deal was no worry - he just wanted to come and play."